Because of the new short videos from the conference I've started up a youtube channel to partner this blog.

You might also want to check out Anarchist Voices which shows short interviews with British Anarchists. It comes from the editor of the magazine of the same name (formerly Total Liberty)

Why Christianity and anarchism?

In The Great Hunger Lottery, the World Development Movement has compiled extensive evidence establishing the role of food commodity derivatives in destabilising and driving up food prices around the world. This in turn, has led to food prices becoming unaffordable for low-income families around the world, particularly in developing countries highly reliant on food imports.

Nowhere was this more clearly seen than during the astonishing surge in staple food prices over the course of 2007-2008, when millions went hungry and food riots swept major cities around the world. The great hunger lottery shows how this alarming episode was fueled by the behaviour of financial speculators, and describes the terrible immediate impacts on vulnerable families around the world, as well as the long term damage to the fight against global poverty.

In the report we describe how the current situation came to pass, the risks of another speculation induced food crisis, and what specifically can be done by policymakers here in the UK as well as in the US and EU to tackle the problem.
To download the report.


You are requested to call the FSA - we are even giving you an example how to do it - on food speculation.
Posted by AdR

Years ago I published a manifesto in which I tried to elaborate what would have happened, had "we", the anarchists, "won" in Spain, somewhere in the late 'thirties. The manifesto was taken over by a zine and that was more or less it - I never read any other thoughts about this matter.

One good reason why this would have been impossible - apart from the fact that it turned out to be impossible because it did not happen - would be that "anarchism in one state" is a logical impossibility. That is one of the reasons why anarchism looks like a long term project: as long as there is still one state the whole of humanity is not free.
(It need not be: the miracle - something we can watch and wonder about, the original meaning of "miracle" - might happen - without optimism no anarchism. Or no Christianity, for that matter).

But "we" had won in Spain.
First "we" had to do away with the fascists. Obviously. The liberals should be silenced too.
Then the social democrats, the bolsheviks and the trotskyists had to be dealt with.
Of course the Roman Catholics still standing behind the episcopate and the Vatican could not be spared.
Then unfortunately "we" would have to deal with all these dissident anarchists who did not like the way all the enemies were treated.

Can you imagine an anarchist police state, a concentration camp at the size of a country which had not even done away with its African colonies too? Not immediately granting independence to these colonies was the main mistake of the Spanish republic - which is hardly ever mentioned since imperialism and racism are so very much taken for granted as normal.

The defeat in the Civil War spared "us" from the horrible reality of anarchism in one country.
But again, it could not have gone any other way.
The relative blessing of defeat.

Anarchism is a set of ideas about ordering human society in the broadest sense of the word. It is not one set of ideas. Peter Maurin has an idea about the solution of the Social Question different from Peter Kropotkin's, not to mention John Zerzan or Murray Bookchin.
Apart form being about order it is very much an idea about justice. Alex Christoyannopoulos makes this very clear in Christian anarchism.
Simply put: "Do unto others as you would have others do unto you" goes for anarchists in general, whether religious (Christian) or not. It cannot be any other way, because if you do not adhere to the Golden Rule you cease to be an anarchist.
Thinking about the consequences of an "anarchist victory" forces to think of it as a victory for humanity, not for "anarchy", "anarchism" and certainly not for "anarchists". Christian or not, it makes no difference.

About being counted out 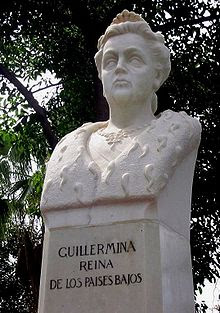 Praise for Alex Christoyannopoulos' Christian anarchism. It is the first (and hence) the best in its kind. No doubt about it and I shall give a review elsewhere and perhaps over here too (I know it has been reviewed already, but a second, third [or more] time will not do any harm).

Yet - I was a bit upset about the idealtypischen Christian anarchist Alex sketches in his summing up chapter.

At p.294.
If there is one thing about being adamantly Christian in my view it is that you never pride yourself on being Christian.
In fact, I cannot stand people's saying in public (or in private, for that matter) "I am a Christian".
In Songs of praise they know where to find those Christians. "What do people say about your being a Christian and being an officer in Afghanistan"? Etcetera. That is why I stopped watching it.

If there is one thing that belongs to being adamantly Christian it is modesty.
For this I have to quote a very embarrassing sentence:

And in the same way, you masters must treat your slaves right. Don't threaten them; remember, you both have the same Master in heaven, and he has no favorites.

If Christian anarchism implies being a t***er (aka w***er) dribbling that s/he does not need the state, but that for the unchosen it works out fine, I will be on the side of the unchosen.
And as for me, I would never call this anarchism. Nor Christian.

Only a couple of days to go before the Christianity and anarchism conference at the Catholic Worker Farmhouse in Hertfordshire. Ooooh!

Always an incredible mix of people, it's always the unexpected things that I end up learning about and it's nearly always the incidental conversations that make the difference. I can't wait.

Hopefully people have taken up Adam's challenge to make banners and stuff to help create an atmosphere and to take to the service on Sunday. I've just found a huge read piece of sail material and some black strips of cloth so I will be having a good think about what to do with all that.

I'm going to bring some other craft stuff and paint to the event and make a space for people to be arty if they want to.

Most of the sessions will be without specialist or speaker but rather an invitation to explore some fairly open but focused lines of thought. However, there will be a session on the Sunday where anyone who wants to put something on can and those who don't can join in or not with those things.

There are different ways of doing this conference thing and we've yet to find a way that suits everyone. Getting consensus from a geographically dispersed community was one way. Getting a few people together to host a broadly open spaced event is another. We're trying the latter this weekend. And since around 40 people are registered it seems plenty of people are okay with that. Although we will find out what people are / aren't okay with in due course.
Posted by Keith 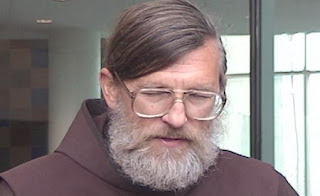 At my Blogtalk Radio Channel you can hear a short interview (cut in two pieces) with David Buer OFM, peace acitivist and carer for the Illegal Alien in the Arizona/New Mexico desert. On the same channel - in case you do not know - the interview on Pacifica with Alex Christoyannopoulos about Tolstoy as a Christian anarchist can still be heard.
So tune in...

Brother David does not call himself a Christian anarchist, though he is interested in the idea. He is a follower of Christ. That is the right spirit.
Posted by AdR 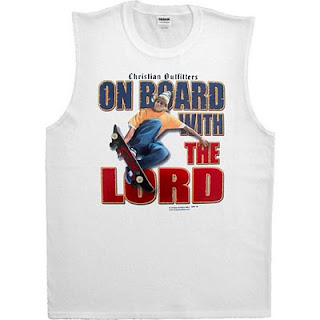 ..we get on board with the Lord.

How's that for a wifebeater, eh?
h/t: Steve Hayes
Posted by AdR