Probably some people will - even angrily - disagree, but operettas generally have silly story lines. And what happened at a certain plane landing in Detroit MI at Christmas looks a lot like an operetta. 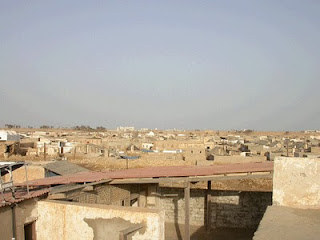 But consequences for the foolish young man from Nigeria and particularly for people in Yemen will not be silly at all. (Of course, there is no connection between the failed attempt to blow up a plane and the earlier military attack by the US at Yemen, how dare you even think of that!)

In the menu of indispensable Antiwar.com my attention was drawn to an article with the title Still Trying to Monopolize the Arabian Peninsula which promises to give a historical perspective to this operetta.
It does. The author has the - to me - intriguing name of Dallas Darling. It turns out that the author has written a book called The other side of Christianaity the description of which sounds a lot like what I consider to be not the other but the appropriate side of Christianity.

Daily reflections on the news by Dallas Darling can be found on a site intriguingly called Beverly Darling. No, they are not one person, I think.

The year ain't over 'til it's over and it is never too late to make a discovery in a certain year.
See what you can conclude about Dallas Darling's position. (My preliminary idea: not an anarchist so not a Christian anarchist either but not far from the Kingdom anyway).

The photo illustrates Yemen as the Afghanistan of the Arabian peninsula, another worthy recipient of bombs from unmanned planes, or manned planes flying at 30.000 feet for that matter. Here I have written about it in Dutch.

Here's a link to a very brief review of Tripp York's "Living on Hope while living in Babylon: The Christian anarchists of the 20th Century."

Summary: It's alright I suppose.

Andre introduced it to us here.
Posted by Keith

Invisble hands of all kinds 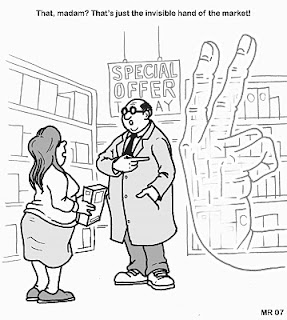 A cartoon reminiscent of the cover of a paper edition of APOS at the beginning of the year.
And so the year ends... 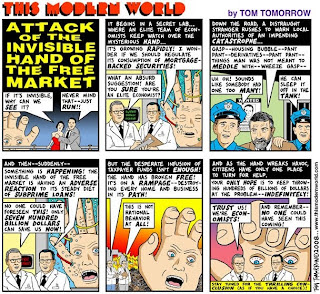 What is more rational or realistic - believing in a Father in heaven or an All Encompassing Love, or in this invisible hand? Just this one time let us ask the question.

May 2010 be a very special year for you and all of us, and for Christian Anarchism.

[For a good view of the cartoons, please click on them.]
Posted by AdR

Email ThisBlogThis!Share to TwitterShare to FacebookShare to Pinterest
Labels: peace 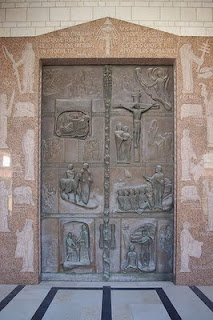 On 11th December, prominent Christian Palestinian leaders have released a historical Kairos Palestine Document, calling on churches around the world "to say a word of truth and to take a position of truth with regard to Israel's occupation of Palestinian land." Unambiguously endorsing boycott, divestment and sanctions (BDS) as one of the key nonviolent forms of solidarity that international faith-based organizations are urged to adopt, the document affirms: "We see boycott and disinvestment as tools of justice, peace and security ..."

Kairos is an ancient Greek term meaning the right or opportune moment. The Kairos Palestine Document is inspired by the liberation theology, especially in South Africa where a similar document was issued at a crucial time in the struggle against apartheid. Informed by a lucid vision based on the universal principles of "equality, justice, liberty and respect for pluralism," Palestinian Christians issue this document today to explore a morally sound way out of the "dead end" reached in the Palestinian tragedy, "in which human beings are destroyed."

The Palestinian BDS National Committee (BNC) salutes the moral clarity, courage and principled position conveyed in this new document, which emphasizes that resisting injustice should "concern the Church" and is "a right and a duty for a Christian," adding that it is "a resistance with love as its logic."

The BNC keenly notes the importance of releasing this historical call on this day, 11 December, which marks the 61st anniversary of the United Nations General Assembly Resolution 194, issued in 1948, calling for the return of the Palestinian refugees to their homes of origin "at the earliest practicable date." Whereas Palestinian refugees are still awaiting their return six decades later, we share the message of hope in today's Palestinian Kairos: "One of the most important signs of hope is the perseverance of the generations and the continuity of memory, which does not forget the Nakba (catastrophe) and its significance. This land is our land and it is incumbent upon us to defend it and reclaim it."

Particularly praiseworthy is the Kairos's emphasis on urging all churches to positively respond to the call by Palestinian civil society, including religious institutions, for "a system of economic sanctions and boycott to be applied against Israel," which, the document clarifies, "is not revenge but rather a serious action in order to reach a just and definitive peace."


The full document. [pdf, with alignment from "the other alphabet"]
Posted by AdR

An Open Letter to The Norwegian Nobel Committee, or: The Laureate pt.2 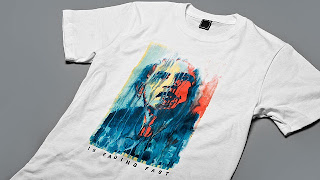 On December 10, you will award the 2009 Nobel Peace Prize to President Barack Obama, citing "his extraordinary efforts to strengthen international diplomacy and cooperation between people." We the undersigned are distressed that President Obama, so close upon his receipt of this honor, has opted to escalate the U.S. war in Afghanistan with the deployment of 30,000 additional troops. We regret that he could not be guided by the example of a previous Nobel Peace Laureate, Rev. Dr. Martin Luther King, Jr., who identified his peace prize as "profound recognition that nonviolence is the answer to the crucial political and moral question of our time — the need for man to overcome oppression and violence without resorting to violence and oppression."


President Obama has insisted that his troop escalation is a necessary response to dangerous instability in Afghanistan and Pakistan, but we reject the notion that military action will advance the region’s stability, or our own national security. In his peace prize acceptance speech, Dr. King observed that "Civilization and violence are antithetical concepts…man must evolve for all human conflict a method which rejects revenge, aggression, and retaliation." As people committed to end the occupation of Iraq and Afghanistan, we are filled with remorse by this new decision of our president, for it will not bring peace.


Declaring his opposition to the Vietnam War, Dr. King insisted that "no one who has any concern for the integrity and life of America today can ignore the present war…We must continue to raise our voices and our lives if our nation persists in its perverse ways… We are at the moment when our lives must be placed on the line if our nation is to survive its own folly. Every man of humane convictions must decide on the protest that best suits his convictions, but we must all protest."


We pledge ourselves to mobilize our constituencies in the spirit of Dr. King’s nonviolent and committed example. His prophetic words will guide us as we assemble in the halls of Congress, in local offices of elected representatives, and in the streets of our cities and towns, protesting every proposal that will continue funding war. We will actively and publicly oppose the war funding which President Obama will soon seek from Congress and re-commit ourselves to the protracted struggle against U.S. war-making in Iraq and Afghanistan.


We assume that the Nobel Committee chose to award President Obama the peace prize in full awareness of the vision offered by Dr. King’s acceptance speech. We also understand that the Nobel Committee may now regret that decision in light of recent developments, as we believe that the committee should be reluctant to present an Orwellian message equating peace with war. When introducing the President, the Committee should, at the very least, exhibit a level of compassion and humility by drawing attention to this distressing ambiguity.


We will do all we can to ensure that popular pressure will soon bring President Obama to an acceptance of the duties which this prize, and even more his electoral mandate to be a figure of change, impose upon him. He must end the catastrophic policies of occupation and war that have caused so much destruction, so many deaths and displacements, and so much injury to our own democratic traditions.


This prize is not a meaningless honor. We pledge, ourselves obeying its call to nonviolent action, to make our President worthy of it.


Jack Amoureux — Board of Directors, Military Families Speak Out

Pete Perry — Peace of the Action

Along with delivering this open letter to the Nobel Peace Committee, activists will present it at a rally in Lafayette Square, Washington, D.C. on Saturday, December 12th, 11 — 4
Posted by AdR 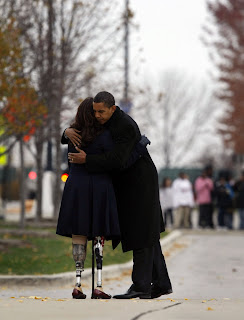 "Our country needs women like you, Suzy."
"Well, mr. President, looks like you are taking care of that."

[See if you can think of another caption to this unmitigated piece of  propaganda].
Posted by AdR 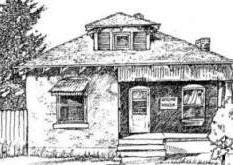 Cannot resist wishing a house with such a beautiful name as André House in Phoenix Arizona the best for its upcoming twenty-fifth anniversary.
If the world were to get much better miraculously the best wish should be: not too many happy returns, please - in serving the homeless and poor.
But this miracle would be one we should work for.
Let's do it...
Posted by AdR