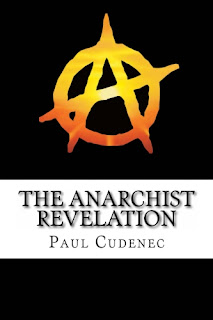 The Anarchist Revelation: Being What We’re Meant to Be is the latest work by activist and writer Paul Cudenec.

Here, he turns his back on contemporary trends of anarchism in a bid to reconnect with the primal force of its root ideology.

Cudenec notes the significance of its refusal of the state and its judicial system, of land ownership and of the need to work for wages in order to live.

But he goes further in suggesting that anarchism represents a whole way of thinking that stands in direct opposition to the blinkered materialism of contemporary society and its soul-stifling positivist dogma.

He writes: “The anarchist does not merely stray outside the framework of acceptable thinking as carefully assembled by the prevalent system – she smashes it to pieces and dances on the wreckage.”

Cudenec explores the fluidity and depth of thinking found in anarchism, in stark contrast to Marxism, and identifies, in particular, a love of apparent paradox that seems to appeal to the anarchist psyche.

He also sees a connection between and anarchism and esoteric forms of religion – such as Sufism, Taoism and hermeticism - whose inner light defies the crushing patriarchal conservatism and hierarchy of the exoteric institutions.

Cudenec provides evidence that anarchism’s roots lie partly in this life-embracing source of inspiration, the bringer of art and poetry as well as of resistance and revolt.

While, he argues, anarchism is incompatible with existing religions, it has the potential to harness its powerful ideology to this universal esoteric current and thus become the religion of the future, the spiritual and political revelation that will save humankind from a grim future of slavery, corruption and destruction.

In making his case, Cudenec draws on the work of anarchists such as Gustav Landauer, Michael Bakunin and Herbert Read. But he also widens the field of enquiry to include the philosophy of René Guénon, Herbert Marcuse and Jean Baudrillard; the existentialism of Karl Jaspers and Colin Wilson; the vision of Carl Jung, Oswald Spengler and Idries Shah, and the environmental insight of Derrick Jensen and Paul Shepard.

With a fusion of scholarly research and inspiring polemic, Cudenec succeeds in forging a coherent and profound 21st century world-view with an appeal that will reach out far beyond those who currently term themselves anarchists.