A dream of John Ball 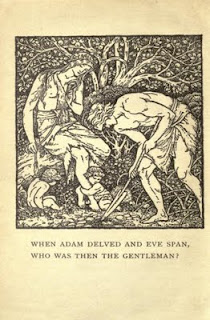 Talking about John Ball - which we were....
Religion and the rise of capitalism by R. H. Tawney was the first off-the-list book I bought and read as a student eager to get to grips with how the world actually is. When Adam delved and Eve span/who was then the gentleman? was a phrase the nouveaux riches of the late medieval times apparently feared, in the dawn time of capital and its important supporting system of suppliers of credit this question was not supposed to be asked.

Maybe we are living in the dusk days of capital and its banks, it certainly looks that way. Show me what you fear and I will tell you who you are: apparently climate camping is utterly subversive.

Meanwhile, back in the nineteenth centruy, William Morris wrote his Dream of John Ball. You should read it in the brochure edition that might still be found in the dungeons of radical bookshops. But if you cannot find it - you can read it on the net. 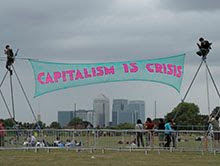