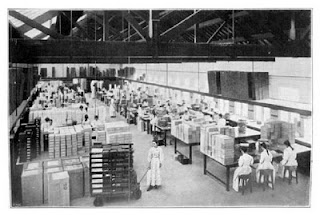 ...buying a Brand Product and yet somehow feeling connected to the lofty ideal of Christian or Religious Anarchism.

The Cadbury family was the type of entrepreneurs which died out sometime along the recent history of capitalism: purportedly well-meaning towards the workers in the factory and their families. The company started as a provider of a substitute of that scourge of the working class, alcoholic drinks. The scourge remained, Cadbury somehow lost the original meaning.

Yet, Beatrice (Betty) Cadbury has a lasting place in the history of twentieth century Christian anarchism, being married to Dutch social reformer and religious anarchist Kees Boeke. the couple working as a team in the anti-war/anti-miltarist movement and starting their own school, De Werkplaats.
They were founder members of War Resisters International and active prison abolitionists.

Having a bar of chocolate with that name on it to me meant for a short while being connected with this history. Silly perhaps, but the brand is not present in my part of the world, so I thought I could and should buy it at British stores in my city or in Britain itself whenever possible.

I suppose it had been a silly idea long before the takeover which puts an end to any idea of Quakerism, Englishness and Worker friendly enterprise.

Still, I would have liked to remain a bit naive at this point. But the show is really over now.
At least War Resisters Inernational and De Werkplaats [for what that is worth] still exist.
Posted by AdR