Hope to be conquered 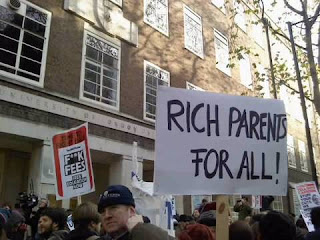 We are told about the disdain displayed by the US regime towards all the rest of the world, which should behave according to the directives given from Washington DC. If you are poor you still can be robbed even more, downtrodden, occupied, tortured, plagued with disease that should have disappeared from the earth ages ago.

We are told that the only person "they" can find responsible for the "leaks" at the moment and whom they could get hold of is being tortured.
We take it for granted, because we have been getting used to it.

Looking outside from a country that is ruled by a government proud to be to the right of the nazis I can only envy the Irish, Italians, Greeks, English... who still protest out on the streets even though the protests are stifled in legislation which quickly leads to the question: what is next?
Are you fighting for the hope that prevailed under so-called neoliberalism which is being trashed by the same neoliberal rulers these days?
There is a hope beyond this, but how can you describe it, let alone how can you try to reach its realisation for perhaps even a tiny part only.

Some thoughts to be read:

The riot is as much about dreams that have yet to become possible as they are over the loss of existing entitlements. There are hopes that lie dormant or hidden that speak of different ways of being; of different kinds of dreams and futures. The crisis of hope and the coming scarcity of the future for many people is a betrayal that makes possible a different kind of hope – a hope against hope, violently against aspiration and cold conformity.

Please have a look here too.