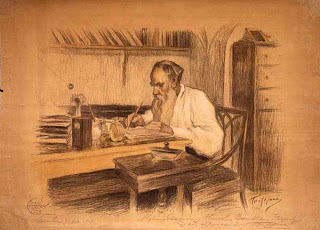 Chris Floyd, former columnist for the Moscow Times, now an independent journalist, speaks out as a closet Tolstoyan. Welcome!

It is marvelous to see how Leo Tolstoy continues to have a disturbing effect on the power structures of church and state (“For Tolstoy and Russia, Still No Happy Ending,” front page, Jan. 4). This has always been the case, from czardom through Communism and now in Russia’s “managed democracy.”

For example, despite its promotion of his novels, the Soviet regime repressed vast swaths of Tolstoy’s work, especially his thoughts on nonviolence, the evils of state power and — ironically, given the Orthodox animus — his heartfelt religious writings. The “Tolstoyans” themselves were persecuted by the Bolsheviks.

I doubt if Tolstoy would want “forgiveness” from the Orthodox Church today, or marks of distinction from the state. But he would doubtless be pleased that his turbulent ideas are still alive, still radical and still troubling the powerful long after he was laid in his solitary, unmarked grave.

The article in the NY Times about the battle around Tolstoy's excommunication, to which Floyd is referring.