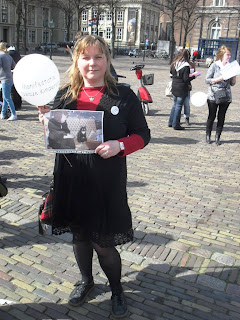 A minute silence dedicated to your mother who died due to care provided in an old people's home - a gripping experience.
One of the organisers of the manifestation tells it with tears in his eyes. He had heard my story on national radio. We arrived a bit too late at the manifestation to be present for the silence..

Dwaze kinderen, foolish children - the phrase refers to the Mothers of the Plaza de Mayo, called Madres locas by their adversaries supporting the military regime - these foolish children demonstrated for the first time against the abominable state of care for the elderly or disabled in so-called care homes in the Netherlands.

I should hesitate to mention it, having heard that conditions are worse in most British care homes. But then again, if that is so, stand up and be counted and raise your voices.

Back in the Netherlands: hearing about someone's mother who was sedated by unknown "prescription" drugs, who was wheeled to the mortuary where she eventually died of hypothermia - you are not supposed to call it murder... but how else should you call it?

As for me, I still do not know what was done wrong with my mother. It is bad enough to have to deal with so-called care managers, inhouse gp's without any real knowledge or capability, first the phone call about her death on Saturday morning and a few hours later a second call: "Cannot you take IT away, IT is getting smelly".
"We have our planning to work by", reply after we noticed that all her earthly possessions had been robbed from the room where she died. They had allegedly been demolished but some pieces could be found back and others presumably were put on ebay or elsewhere by your friendly care workers.
So my mother died according to plan.
I will not tell the full story, especially since there are still so many questions about her death.

[If you read Dutch: the story can be found here (to be read in reverse order) and here (reverse order again).
The organisation behind the manifestation: here and here where an English translation is provided sometimes.]

But "mistakes were made, we offer an apology, please give your bank account number" says the new CEO of the Care Corporation, tastefully called Osira, combining Catholic, social democratic and humanist houses in one corporation. As if the robbing of tangible pieces of memorabilia (amongst which my own wedding picture) can ever be expressed in money.

That is why we were in The Hague, near the government buildings, as Foolish Children.
And we shall be there again every first Saturday of the month. And who knows - it may be the Dutch equivalent of Tahrir Square somehow, some day... 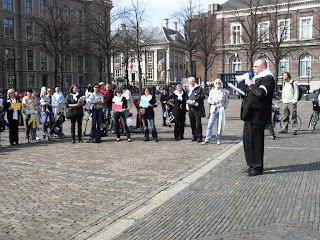 Osiris, the Egyptian god of death and resurrection - in the highly probable case you did not get the distaste of the name "Osira".