Report from the ash heap

Hannah Arendt's book about Eichmann in Jerusalem was close to where I laid my head to sleep, alongside Dutch author Harry Mulisch's report on the Eichmann trial. Arendt and Mulisch were present at the trial and wrote about it - the phrase "the banality of evil" was coined. Arendt had already written the monumental Origins of totalitarianism, Mulisch was on the way of becoming the monument he eventually was as himself.

Evil indeed is trivial, banal.
It does not prevent your telling the world that you like to travel and to eat out. That you watch Gray's anatomy (!) and are interested in the solitude of prime numbers. Place a picture of yourself in the inevitable blue jeans, legs wide open, sitting on a sofa in a tank top, and - screenshot saved from Google-cache - yourself (on a holiday presumably) near a waterfall.
The signing tag of your email tells you are a "case manager dwelling fraud" which looks important. You did not finish your study of the French language, your curriculum vitae as published out in the open leaves a gaping hole but who will care - you are on Facebook.
Someone gave you the key to the appartment of the only student of Christian anarchism in that country of yours which prides itself of being governed by a regime to the right of the nazis. The building corporation you represent is led by a former secretary of War, member of one of the brown coalition parties. "This key seems to circulate in the building - odd," she tells you. But it was convenient to walk into the premises and decide you were SHOCKED SHOCKED about the mess and you decided he - well, it is about me, so let me say: I - did not live where I was supposed to live. She got the address she phoned to from snooping through "the mail" as she in a mixture of stupidity and honesty tells.
She concludes I have not been there for two years.
I am stunned by the brazenness of telling you walked into somebody's place and ask him about it, using the phone number of his (my) beloved. "I don't know if it is just accidental I should find you here."

She will call back to this number later in the week. She does so on the day my mother is unexpectedly admitted to hospital, a nightmarish series of events which ends in her death on the 12th of February this year.

The case manager however kept on pushing for a conversation about my living conditions or however you should translate this bureaucratic phrase emanating from the Fourth Empire. To me it was like answering questions about your sex life to your rapist so I did not comply. THEY do not like that.

Let me cut this short now.
On Monday 11th of July I was thrown out of the house which I have rented (and for which I automatically paid every month) for more than 27 years. Someone representing the Community of Amsterdam decided there was nothing of any value in my house so everything could be rightly destroyed.
It was thrown out of the window in a finite but long-lasting waterfall of plastic bags. I lived on the third floor, just to give you an idea.
My vinyl collection (a lot of Northern Soul and rare British Beat), my library (books revised for a second edition by the author himself), the books I have written myself (there were about four boxes of them around) - nothing of any value.

I did not have a flatscreen television set or anything else which presumably would be considered "of value". "What you consider to be of value does not count," I am told.
Culture is garbage, the regime decided somewhere in the autumn, no money should be spent on it at all and if you have anything which testifies of any intelligence beyond some hospital soap and a crime novel everyone but me seems to know THEY will gladly throw it on the dust heap. Along with your miserable self.

I had to laugh when I saw a broken set of dentures of mine rolling along the pavement. The ridiculous side of aggression against your intimacy. To make a picture of it I put it on some plants I keep in a garden house where I shall spend some future days. Look and be horrified...

- to be continued, I fear - Jobe did not have a laptop but I have -

P.S. I beg for some leniency about forgetting to tell that the lady who had given herself permission to snoop around very recently ended her facebook entry (that is why the screenshot was taken from the cache), I gather she expected some negative publicity coming from someone who did not keep anything of any value. 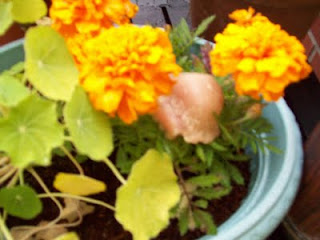