Confessions of an American anarchist: why I'm not voting in the US presidential election 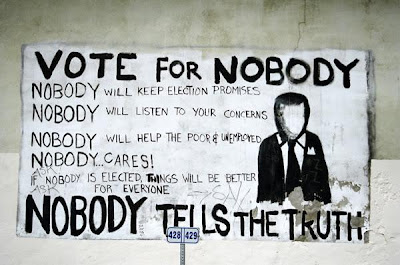 If voting changed anything, they’d make it illegal. –Emma Goldman

I had the t-shirts, the posters, the buttons. I chanted “Yes, We Can” and watched the videos. I believed in his hope. As a brand new Bachelor of History and Political Science, I wanted things to change and believed they were changing. I cast my absentee ballot, and I was there in Grant Park the night he was elected.

But the minute the crowd started chanting, “Yes, we did!” I was uneasy. What did we do? Contribute to his campaign (over $650 million)? Put signs in our front yards or slap stickers on our cars? Check a square, connect an arrow, punch a hole, press a button? Attend a rally? “Yes, we can” was supposed to be the rally cry for all Americans to work together—both parties—after the election on the incredibly difficult issues we faced as a nation. The message “yes, we did” implied that our work was done. Go to it, Mr. President. Fix it for us.

I wasn’t just disheartened by the crowd and the din. Almost a year after the election, I read an in-depth article about predator drones in Pakistan. His administration turned to impersonal, anonymous tactics that killed innocent people. The war wasn’t ending. He was bailing out corporate executives who lined their pockets with Americans’ money at Christmas time.

It started to seep in that this guy couldn’t do it. He could give inspiring speeches about hope and change, but he couldn’t end wars. He couldn’t fix the economy. If it seems like I’m heaping unfair blame upon his head, I’m not. The Republican candidate couldn’t do it either. Third party candidates couldn’t do it.  No man or woman could.

I haven’t voted since 2008, not even in two pretty huge elections in Wisconsin. It’s not political apathy; it’s the opposite. I care too much about the world to leave it in the hands of two squabbling political parties who waste more money and breath on bickering and stalemating and generally ignoring the welfare of all citizens.

But I still believe in “Yes, we can.” In fact, I believe it now more than ever, which is why I’m not voting.

My big breakthrough came with the spring. In 2010 I lived in Chicago. I often angrily stewed that the city neglected my neighborhood because it didn’t contain the right demographic or the larger-than-life attractions that allure downtown visitors. When I walked down my boulevard and spied trash accumulating beneath trees and in gutters, I muttered curses under my breath about the Chicago Department of Streets and Sanitation.

But one day, it dawned on me. Why am I depending on the city to clean up my neighborhood? My neighborhood. What kind of effort would it really take for me to get up some Saturday morning to stuff a plastic bag with the abandoned rubbish? What would it take to invite a neighbor or two to do it with me? I had given up my power and responsibility for my neighborhood to a corrupt city government.

The biggest, most positive changes we’ve seen in this world result when people organize, mobilize, and work for and demand change. Not politicians, not world leaders, not businessmen/women, not the GOP or Dems. People—of all faiths and creeds and nationalities and genders and races and walks of life. The Labor Movement. The Civil Rights Movement. India’s fight for independence. The end of Apartheid.

Governments in almost every case have been the cause of pain and strife. They have organized hate and crime through wars, promoted racism and prejudice through unjust laws and courts, abused power to reward special interests, institutionalized poverty and created dependency on corporations.

Four years ago I elected someone I thought might stop the cycle. I learned that “electoral success… pacifies.” Suffrage has merely been granted to our forebears to pacify them continuously. Many men who fought in the Revolutionary War were ineligible to vote in the new Republic’s first elections (only property owners had the right). Black men and women built this country for 246 years without ever getting to choose who wrote the laws that enslaved them. Women of all races worked side-by-side with their fathers, husbands, brothers, and sons to build this country and then gave them up to war when asked to do so, but they waited 143 years for the right to choose policy makers. Even after winning suffrage, many black Americans faced prejudice at the polls that prevented their rightful vote. So while I appreciate the people in the past who fought for my suffrage, I also acknowledge how ridiculous it is that anyone ever had to fight for suffrage, to beg for the government to throw them a bone.

Yes, I appreciate the men and women who fought for my right to vote. They fought for a right to choose who ruled because they believed their vote could make a difference. I've learned enough to know that my vote won’t make any difference. My vote instead endorses a system that has allowed obstructions to liberty; a system that gives me only two choices and two parties, neither of which I agree with, neither of which is actually doing anything to promote the well-being of the average American; a government that constantly violates the human rights it helped to craft, around the world and within its own borders; a government that will only continue to covet power, whether run by the left or the right, at mine and my neighbors’ expenses; a government that will continue to wage wars in the name of lofty ideological goals that it constantly contradicts; a government that will always only pay lip service (if any service at all) to correcting and acknowledging the historical evils it has inflicted for the past 236 years.

No, I won’t be voting in 2012, nor will I likely vote in 2014, 2016, 2018…. My time, energy, and money could be spent in such better ways, working for and enacting change that I actually CAN believe in, change that will have a far greater impact than hours spent lined up at the polls. I still believe we can “heal this nation” and “repair this world.” I just know there are better ways to do it than casting a ballot for a politician who will always disappoint. My time spent on November 6 is better spent in my neighborhood, in my community, working with my neighbors to love one another.