To challenge the powers is in part about generating the stories that go on to reproduce themselves in other peoples' lives as the kingdom of God is established.

Here are some of the stories generated at Queen's this week. Ekklesia; Inspire; Church Times; Birmingham Mail; BBC Midlands; 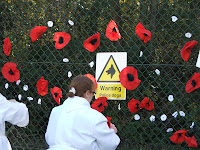 Queen's Foundation trains people for ministry in the Church of England, the Methodist Church, and other independent Churches. As part of the Anglican and Methodist training students are expected to take part in at least one Prophetic action during each year and to reflect on this action in their own spiritual formation and in the life of the worshipping community.

"For many it has already become a radically conversion experience. As I stood at the fence at AWE and received the 'ash of repentance' I cried for the futility of state violence and it's totem - the Trident missile and won't ever be quite the same."