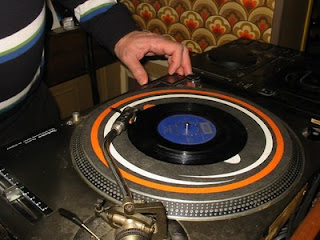 Back in June 2006 at the conference of the UK Jesusradicals in Leeds somewhere somehow the decison was made by a few people to revive the paper A pinch of salt, a former Christian anarchist journal from Britain. I would or should have been correspondent from the Continent.

Now is the time for me to be that correspondent. Before placing a serious entry I thought it to be appropriate to introduce myself. I should have been the Northern Soul deejay at the conference mentioned above - especially went to Chicago to buy loads of danceable gospel 45s for the occasion (the phrase "especially" is used for dramatic effect - the rest of the sentence is true) - and then there were no wheels of steel at the conference... There were two guitars, however, so we had no lack of music.

So here I am, starting a rare Indorocker record from 1963, sometime early 2006, in my capacity of RG de 50-quidman. And I am the man behind christianarchy.org and Christianarchie. It may be a pity you cannot understand most of what is on there, but never fear - AdR tries his best over here in a language that is not his. I understand English is not Keith's first language and there is a fair chance that it is not your first language either, dear Reader. Let's away with the first entry of the day...