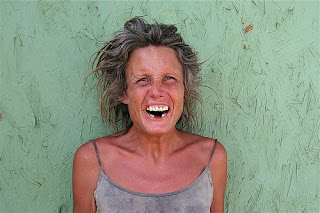 Marcia J. Powell, a mentally ill prostitute and drug addict, died like a dog last week, roasting in a cage in the fearsome sun at the state prison at Perryville.

Her final tortured hours in an outdoor enclosure last Tuesday mimicked those of a five-year-old law-enforcement canine named Rik that died at Perryville in 2007 after having been left by handlers in an exercise run for three hours. Temperatures that day reached 105.

The temperature in Powell's cage last week exceeded 107. She was locked up for an hour longer than the dog before she collapsed.

There are many questions to be answered by the Department of Corrections about Powell's final hours. But her death is only the gruesome exclamation point on a long list of institutional failures that got her there.

DOC officials say that Powell had a rap sheet going back decades and included at least 10 sex and six drug convictions. She'd been in and out of Arizona prisons since 1994.

Records indicate that she left home in California at 15 with a ninth-grade education, no marketable skills and a serious mental illness. A presentencing report describes her as bipolar.

Last summer, she was sent to prison for more than two years on a prostitution charge.

"It's awful the way this woman died," said Donna Leone Hamm, executive director of Middle Ground Prison Reform Inc., which for years has advocated for Arizona inmates and their families. "No one cared much about her when she lived. I hope at least that we care about the way she died."

DOC is investigating the incident. Several employees already are on administrative leave.

After Powell collapsed, she was taken to the hospital and placed on life support. A DOC spokesman told me that the department was unable to locate any family members.

So when the time came to decide whether to pull the plug on the machines keeping her alive, it fell to prisons Director Charles Ryan. Powell was taken off life support at 11:15 p.m. Tuesday; she died at 12:42 a.m. Wednesday.

"The death of Marcia Powell is a tragedy and a failure," Ryan said later. "The investigation will determine whether there was negligence and tell us how to remedy our failures."

For one thing, DOC should not be conducting the investigation. It should fall to an outside agency. The governor should demand it.

According to Hamm, she contacted then-prisons Director Dora Schriro in late 2007 about the practice of placing prisoners in outdoor cages.

"Because no one had died or had been permanently injured, I couldn't get anyone - including the press - interested," Hamm said.

Powell's horrific death and her woeful life should finally get us to ask why Arizona's failed mental-health system transforms county jails and prisons into mental-health institutions.

It should get us to ask why we criminalize people like this but don't adequately treat them, since it's clear that taxpayers end up footing the bill for their care one way or another.

Powell told state officials that she had two children who were given up to foster care, but DOC says the state has no record of that. Police also checked the address of a name she'd listed as a friend on prison records but found no one living in the abandoned house.

In spite of spending years in the system, Powell's life remains a mystery. Her death is a tragedy, although perhaps not on the level of Rik the law-enforcement dog.

There was a public outpouring for him.

Remaining question: who needs compassionate care most - the woman who was put in a cage in the scourging heat or those who thought it a good idea of making such a cage and putting a living being inside of it.
You need not decide, just think about it.