The shocking truth about the British general election... 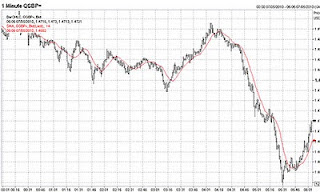 ..and perhaps elections in general in the hard core of Empire.
The opinion of the voters did not matter.

It is hard to believe for someone from one of the many countries in Europe where coalition governments are the rule and not the exception that anyone would consider that a party representing 36% of the electorate would be more entitled to govern than two parties, together representing more than fifty per cent of the voters. "Gordon Brown has been voted out." Oh no, he has not. If the Liberal Democrats would honestly believe Labour would work on proportional representation, then Gordon Brown stays as prime minister. He will have a bigger mandate than the other man. Get used to the idea of coalitions, in Wales, Northern Ireland and Scotland (in reality) they are the rule too.

But all this belongs to the spheres where the United Kingdom would be no longer an annex of some of its former colonies in North America. Much more telling than all the talk about the voting system is the panicky media noise about what really matters about the election.
How will the markets react, that is the most prominent question.

Either "the markets" are a natural phenomenon, like a volcano that is getting angry and will explode since its special god is not pleased with the outcome. The Market as an idol that wants reconciliation.

Or "the markets" have got something to do with human beings. What kind of human beings, and where do they reside?

Answer to the latter question: not particularly or mainly in the UK.
Just like in Greece, probably Spain, Portugal and whichever country is next, the voting public does not matter.
"The markets" matter. They are demanding stable government.
The kind of government that deals with welfare, schools and war, lots of war. War is healthy for markets.

Oh, and police. The Most Important Selling Point of all the main parties is that they are bringing out so many cops into the streets. Markets seem to like that too.

You see, I am not particularly the anti-voting kind of anarchist, and I am sincerely pleased about the first Green MP. I was a member of the Green Party in NL until they took a turn to the right after which they disappeared altogether. (And I am a bit infatuated with Caroline Lucas, I confess). PR, which will give the Greens and others more opportunities, can stop the rot for a short while - and yes, the racists too will have more opportunities, but why only think of them when considering PR?

However, the story of the Importance of Markets rather than the voting public is the final démasqué of what only can be called now parliamentary democracy on its dying bed.

Considering the alternative to parliament is no longer something for some vague future beyond a horizon that inevitably keeps fading. Rather than talking about voting or not or propagating voter apathy it is time to seriously consider the alternative(s).
It may already be too late.