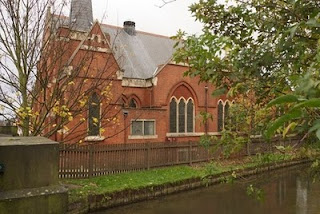 The opening of the of the 'Guiseppe Conlon House' on November 22d was attended by around 200 people including a wide mix of refugees, advocates, punks, hippies, vicars, activists, lawyers, squatters, academics, Muslims, Christians, atheists, Buddhists, musicians, locals and internationals. The internationals introduced themselves in a welcoming ceremony with representatives from Outer Hebrides to Japan, Kosovo to France, and Sweden to Uganda among many others.

The house has already been functioning as a refuge for undocumented refugees and others in need of shelter and support, but the main building (originally a Methodist church, then taken over by Roman Catholics and more recently disused for two years) has now been officially opened both as a continuing shelter and as a community facility.

The new centre is named after Guiseppe Conlon, who was the father of Gerry Conlon, who at the age of 21 was one of the four Irish men wrongly convicted for the Guildford bombings in the early seventies. despite no connection to the IRA, and sound alibis for Gerry and one of the others, it took until 1989 for human rights lawyer Gareth Peirce to finally get them released, and another 16 years until the British government offered an apology when for political reasons Tony Blair made a surprisingly unreserved statement.

Gerry was beaten in police custody until he made false confessions implicating completely innocent members of his family, and as a result Guiseppe, an ex-marine, was arrested in London where he was trying to find a solicitor for his son. He was not a well man, and died, a convict, in prison in 1980. His widow Sarah was charged £3500 to fly his body home, and the home office billed her for his repatriation - his body was flown back and forth four times as the press shamed him, before he finally rested.

He was the only one from the Guildford Four, Birmingham Six, and Maguire Seven, who didn't live to be vindicated and see his freedom. his treatment remains a terrible blot in the dark history of Irish repression.

The Catholic Worker communities, as well as offering shelter to people suffering injustice and violence, are also pro-active in seeking out and confronting the roots of those injustices. Catholic workers have been involved in acts of challenging civil disobedience, and one of the organisers at the new centre was imprisoned for 13 months in the US for taking a hammer to a B-52 bomber. The hammer was returned on his release and was later used against BAE in the UK, returned once more, and used again in a recent ploughshares action.

After an opening welcome ceremony and a song from Irish singer/songwriter Joe Black, the human rights lawyer Gareth Peirce took the stage to wish the project well and to movingly describe her experience of the lies and corruption around the Guildford Four and Gerry Conlon's family, the Maguires, and Guiseppe.

After more music from local duo, Lovers Electric, Ciaron O'Reilly spoke more about the project and the difficulties he has faced as an anarchist catholic - untrusted by the left as a catholic and untrusted by the catholic establishment due to his anarchist way of doing things and his past incarcerations in various nations round the world for acts of non-violent civil disobedience.

Poet Stephen Hancock then provided some excellent conscious and political verse, before Angolan journalist, Rosario Miranda, spoke about the campaign for justice for Jimmy Mubenga. Jimmy was the man who during a forced deportation was killed at the hands of GS4 security aboard a passenger flight to Angola. Passengers, though concerned by the blood, his screams for help, and the violence of the guards, were either too intimidated or too disempowered to intervene. Rosario compared the media attention some woman got for putting a cat in a bin - the cat survived, the woman was hounded, she lost her job, she was prosecuted and she was vilified. In contrast, the GS4 officers remain in work, no-one was prosecuted, and the newspapers have forgotten the matter. He asked poignantly whether the cat was more precious than a black man?

Joe Black, who traveled from Dublin then provided a full set of songs, including a special one written to celebrate the opening and to commemorate Guiseppe Conlon, and finally local singer Raz ended the formal entertainment.

Before and after the timetabled events, there was a huge spread of donated food and drink, and more entertainment from the 'Bow Creek Ramblers String Band'.

The Guiseppe Conlon House intends to continue its work with homeless refugees, and to act as a hub for non-violent resistance to the war machine.

For more information, including news of the current campaign to close down the "army shop" recruiting centre in a shopping mall in Dalston, see the London Catholic Worker website.