Yeah! Dorothy Day is a real human being 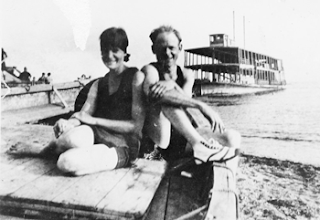 Not being a Roman Catholic I do not like the idea of beatification of Dorothy Day, even though I respect the feelings of our Catholic brothers and sisters who would love to see her canonised. Remember, we are all called to saintly behaviour (even though we do not succeed - I remain a staunch Protestant in this respect).

There is one aspect of her biography which I specifically disliked: the sudden separation from her non-believing husband/man/partner (however you want to call him).
And now the indispensable Robert Ellsberg comes up with the story of Day who apparently still loved the man she seemed to have discarded for Rome.
For me it is a reason to rejoice a bit about her and put aside my feelings of doubt about the episode of her conversion.

New letters reveal the frank sexuality of a possible saint.

There is St. Augustine, who writes about his youthful search for “some object for my love.” In different forms and persons, including his mistress of many years, he evidently found it. But in every case Augustine wants to show how the “clear waters” of love were invariably spoiled by the “black rivers of lust.” Augustine describes his relationship with his unnamed mistress, the mother of his son, in these unflattering terms: “In those days I lived with a woman, not my lawful wedded wife, but a mistress whom I had chosen for no special reason but that my restless passions had alighted on her.”

It is striking to compare Augustine’s treatment with a similar passage in The Long Loneliness, the memoir of Dorothy Day, the American-born co-founder of the Catholic Worker. There she introduces the story of her love affair with Forster Batterham, and the role he played in hastening her spiritual journey: “The man I loved, with whom I entered into a common-law marriage, was an anarchist, an Englishman by descent, and a biologist.” They met at a party in Greenwich Village in the early 1920s and soon thereafter began to live together—as she put it, “in the fullest sense of the phrase”—in a house on Staten Island.

Among their bohemian set there was nothing scandalous about such a relationship. It was evidently Dorothy who liked to think of it as a “common-law marriage.” For Forster, who never masked his scorn for the “institution of the family,” their relationship was simply a “comradeship.” Nevertheless, she loved him “in every way.” As she wrote: “I loved him for all he knew and pitied him for all he didn’t know. I loved him for the odds and ends I had to fish out of his sweater pockets and for the sand and shells he brought in with his fishing. I loved his lean cold body as he got into bed smelling of the sea and I loved his integrity and stubborn pride.”

Wait a minute! Day is here describing, without any hint of Augustine’s obligatory shame or regret, her physical relationship with a man to whom she was not married. Needless to say, she was not yet a Catholic. Yet her point is to show how this lesson in love, this time of “natural happiness,” as she called it, awakened her thirst for an even greater happiness. She began to pray during her walks and started to attend Mass. This religious impulse was strengthened when she discovered she was pregnant—an event that inspired a sense of gratitude so large that only God could receive it. With that came the determination that she would have her child baptized, “come what may.”

As a dedicated anarchist, Forster would not be married by either church or state. And so to become a Catholic, Dorothy recognized, would mean separating from the man she loved. “It got to the point where it was the simple question of whether I chose God or man.” Ultimately, painfully, she chose God. In December 1927 she forced Forster to leave the house. That month she was received into the church.

So goes the familiar story recounted in her memoir. But it is not the whole story. In editing Day’s personal letters, All the Way to Heaven, I was astonished to read an extraordinary collection of letters to Forster dating from 1925, soon after their first meeting, until December 1932, the eve of her new life in the Catholic Worker.

The early letters certainly reflect the passionate love described in The Long Loneliness. In her first letter she writes: “I miss you so much. I was very cold last night. Not because there wasn’t enough covers but because I didn’t have you.” In the next, “I think of you much and dream of you every night and if my dreams could affect you over long distance, I am sure they would keep you awake.” Separated for some weeks, she writes Forster: “My desire for you is a painful rather than pleasurable emotion. It is a ravishing hunger which makes me want you more than anything in the world and makes me feel as though I could barely exist until I saw you again...I have never wanted you as much as I have ever since I left, from the first week on, although I’ve thought before that my desires were almost too strong to be borne.”

The letters skip over the time of Tamar’s birth and Dorothy’s conversion, but after her parting from Forster they resume with poignant intensity. Despite the implication in Dorothy’s memoir that her conversion had marked an end, once and for all, to their relationship, this was far from the case. In fact, the letters continue for another five years, as Dorothy pleaded, cajoled and prayed that Forster would give up his stubbornness and consent to marry her.

In vain, she assured him that he would be “involving [himself] in nothing” if he married her. “Religion would be obtruded on you in no way except that you would have to see me go to church once a week, and five times a year on various saints’ days. I would have nothing around the house to jar upon you—no pictures and books. I am really not obsessed as you think I am.”

At times she could not hide her frustration: “Do I have to be condemned to celibacy all my days, just because of your pig-headedness? Damn it, do I have to remind you that Tamar needs a father?” Her tone fluctuated between tenderness and bitter reproach: “I am not restrained when I am lying in your arms, am I? You know I am not a promiscuous creature in my love.... But it is all so damned hopeless that I do hope I fall in love again and marry since there seems to be no possibility for a happy outcome to our love for each other.”

By the fall of 1932 Dorothy was living in New York. In December she traveled to Washington, D.C., to cover the Hunger March of the Unemployed. There on the feast of the Immaculate Conception, she offered a prayer that God would show her some way to combine her Catholic faith and her commitment to social justice. Immediately afterward she would meet Peter Maurin, the French peasant philosopher who would inspire her to launch the Catholic Worker and whose ideas would dominate the rest of her life. Whether there was any relation between the opening of this new door and the decision finally to close the door on her hope of marrying Forster, Dorothy’s letter to him of Dec. 10 would be her last for many years.

After describing her strong commitment to the prohibition of sex outside of marriage, she writes: “The ache in my heart is intolerable at times, and sometimes for days I can feel your lips upon me, waking and sleeping. It is because I love you so much that I want you to marry me.” Nevertheless, she concluded: “It all is hopeless of course, tho [sic] it has often seemed to me a simple thing. Imaginatively I can understand your hatred and rebellion against my beliefs and I can’t blame you. I have really given up hope now, so I won’t try to persuade you anymore.”

But even this did not mark the end of their relationship. Over the years they remained connected through Tamar. There would be friendly notes, the exchange of gifts and visits in the hospital. In Dorothy’s final years Forster took to calling every day. He was present at her funeral in 1980, and later at a memorial Mass at St. Patrick’s Cathedral.

So what, in the end, do these newly published letters reveal? They certainly confirm the deep, passionate love described in Dorothy’s memoir, thus underscoring the incredible sacrifice she endured for the sake of her faith. That sacrifice lay at the heart of her vocation; it was the foundation for a lifetime of courage, perseverance and dedication. It marked her deep sense of the heroic demands of faith. But in no sense did it represent a conflict in her mind between “merely” human love and “higher” religious aspirations. “I could not see that love between man and woman was incompatible with love of God,” she wrote. And if she had had her way, she would have embraced a happy family life with Forster and the many children she dreamed of.

Although, as Dorothy reported, some of her radical friends insinuated that her turn to God was because she was “tired of sex, satiated, disillusioned,” her true feelings were quite different. “It was because through a whole love, both physical and spiritual, I came to know God.”

If Dorothy Day is one day canonized, these letters will provide a fairly unusual resource. They serve to remind us, if that were necessary, that saints are fully human—perhaps, as Thomas Merton put it in Life and Holiness, more fully human: “This implies a greater capacity for concern, for suffering, for understanding, for sympathy, and also for humor, for joy, for appreciation for the good and beautiful things of life.”

Dorothy considered her love for Forster to be one of the primary encounters with grace in her life, one for which she never ceased to rejoice. That insight and that witness are among her many gifts.

Some letters - it may look like voyeurism, but it may also be comforting for the doubtful...