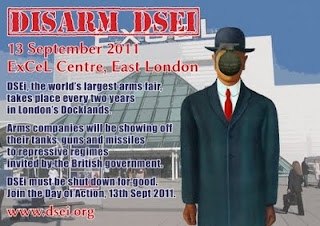 The world’s biggest arms fair – DSEi – is coming to East London this September. Unless we stop it.

This year we’ve witnessed more of the horror that comes when the UK arms repressive regimes — armoured vehicles used to suppress protest in Libya and Bahrain were sold by the UK, along with crowd control equipment and tear gas.

With over 1200 companies exhibiting, and military delegations from all over the world, DSEi 2011 is back and bigger than ever, selling everything from F16 planes to unmanned drones.

There are also training sessions happening across the UK in the run up to DSEi.