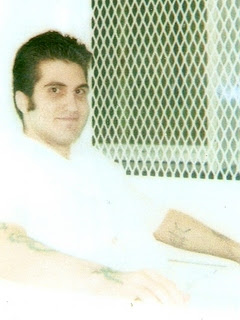 Richard Perry Esq. gets a huge applause when it is mentioned how many people were killed on his watch as governor of Texas. Richard Perry Esq. wants to be president of the United States of America, and as we all know, that is a position in which one can and will kill many people more - innocent or not.
Frankly I am lost for words about Steven Woods, whom I heard about a few years ago and attached to as attachments went on Myspace. And then Myspace went out of style and yes, I forgot about him.

As far as I know this Christian anarchist who has claimed innocence all along will be killed today, September 13th, because Richard Perry Esq. will want to prove that he is tough on crime.
One of the sites dedicated to Steven Woods' case.

update 14 September 0.30 British Summer Time
Steven's corpse has been released for his family to touch it "while it is still warm".