Visions of tomorrow: This is what democracy looks like 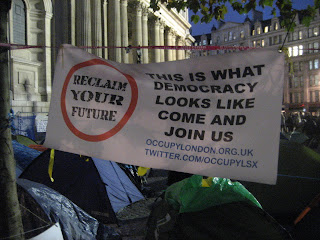 Those involved in permaculture know that it's on the boundary between environments (e.g. hedge meets the meadow) that the most productive signs of life are found.

So creating boundary places and stepping back is often enough.

The OLSX camp at St Paul's Square is doing just that and those people on the boundaries (established church, activists, bankers) can't help but be drawn into it. It catches them off guard to be drawn into the real world in this way.

But it's not just boundaries. It's bridges as well. Activists over the last couple of decades have been rediscovering the 'internationale' of radical politics. A soldier, in uniform, stood outside St Paul's and declared the soldiers as 'the 99%' being exploited in wars that only benefit the wealthy. What a source of truth!

And the OLSX began as an act of solidarity with the Adbusters call to Occupy Wall Street. UK government policy is often little more than an arm of US foreign policy so the demands of Occupy Wall Street to 'take the money out of politics' as concrete and direct implications for UK political life.

As with all big social changes a combination of unavoidable factors and social pressure create great changes. Slavery was abolished in Britain because of a change in economics as well as social pressure. Women got suffrage because of the Suffragettes but the reality of it became unavoidable when after the war women found they had been skilled up to do paid work and extending women's right became near impossible to avoid.

The US is losing it's super-power status bit by bit. We saw it in the decision by UNESCO to invite in Palestine against US/Israeli wishes. We see it in the economic changes that are taking place around the world. There is no better time to demand global and local change.

Luke Bretherton, writer on Christianity and politics and a participant in London Citizens, offers a wonderful and simple analysis of what is at play in St Paul's Square.

If you've had to face down the irritating "they don't even know what they're protesting about" bollocks that some people are parroting from the mass media then this might be helpful document to turn to for a less than straightforward but an extremely helpful response.

I don't want to summarise it because it's worth reading in full. So have a look here.