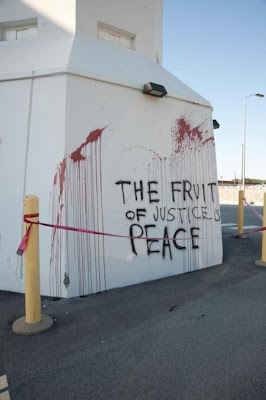 Sixteen years in prison is not enough? Sister Megan Rice and her friends, all peace activists, already face 16 years in prison if convicted for a nonviolent peace action. Sister Megan, Greg Boertje-Obed, and Michael Walli went to Oak Ridge, Tennesse, to say NO to nuclear holocaust. Instead of dropping charges, the US Attorney General and the Department of Justice are considering two additional charges against this 82-year-old nun and two U.S. veterans, both sabotage charges. One carries 20 years and the other 30 years in prison. With the new charges, the defendants would face a maximum of 65 years in prison. This is the equivalent of a death sentence.

Megan, Greg, and Michael called their action "Transform Now Plowshares," and brought nothing more dangerous than flashlights, binoculars, bolt cutters, bread, flowers, a Bible, and household hammers to Oak Ridge. They hammered on the walls of a storage facility to symbolize the disarming and abolition of nuclear weapons. The real danger to society is not this nun and two veterans, but instead the facility they want to transform. This unconstitutional facility holds enough weapons grade uranium to make more than 10,000 nuclear weapons, far more than what scientists say is needed to destroy life on earth.

Please join in this petition to the Attorney General of the United States asking him to refuse to authorize additional charges: 16 years in prison for revealing the criminality and insecurity of nuclear weapons production smacks of killing the messenger for the failings of the king.

For more see here.
To contribute to this work for nuclear disarmament, click here.
To sign the petition: here.

More on the case: Woe to the empire of blood, part II and part III.