The Anglican Communion as an anarchist Church 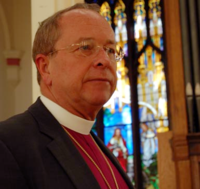 In her article “Autonomie et federalisme chez les anarchistes” [Autonomy and Federalism as seen by Anarchists, published in the anarchist quarterly “Refractions” No 8, Spring-Summer 2002] historian Marianne Enckell, who in daily life, among other things, runs, with help of other volunteers, the international centre for anarchist research CIRA in Lausanne, Switzerland, makes hers Francois Candebat’s conclusion that what is specific for anarchists is the interaction in their theory and practice between solidarity, autonomy and federalism.

If this is true, the Anglican Communion (with member churches such as the Church of England in England and the Episcopalian Church in the USA) is to be considered an anarchist church judging by the report of the recent meeting of heads of member churches published in the British daily The Independent of 17 October 2003. The meeting had been convened because of fear of a split in the Communion over the planned consecration as bishop of a gay man in the USA and the blessing of same-sex couples in Canada, things vehemently opposed by important groups and bishops in other member churches. (The article is reproduced after this introduction.)

Comparing the outcome of this meeting with the outcome of the discussion about alleged deviations from the rules by parts of the French and Italian sections at the XXth Congress of the anarchosyndicalist international IWA/AIT in Madrid in December 1996, I see more feeling for solidarity, federalism and autonomy among those church dignitaries than among those people who have, so to say, expressly vowed their commitment to those values. The theologians of anarchosyndicalism stopped their disruptive behaviour at that congress only when one of the presidents of the meeting had had enough if it and had stepped down and one of their kind had taken over and led the meeting to go with their demands after rejection of a suggestion by the German delegation to appoint a commission to investigate the conflicting claims. To the difference of the church people, the anarchosyndicalist theologians wanted to act precipitately, there was no time to lose to oust people whose views differed from theirs.

The anarchist touchstone words “solidarity”, “autonomy” and “federalism” don’t appear in the report about the meeting of the church people but my biblical background says “don’t’ look at their words, rather look at their deeds” (or was it the other way round and has Jesus said about the Pharisees: “Do as they say, not as they do”?). Anyway, I found the solution worked out by the Anglicans humane and sometimes brilliant, for instance the part reported in the following passage:

Obviously, the feeling for solidarity, federalism and autonomy has enjoyed here the support of superior diplomacy, a quality sadly underexamined in anarchist (and anarchosyndicalist) theory with often the celebration of axes as symbols of superior wisdom or, at least, fidelity to truth as a result.

The paper version of The Independent carried a picture of the Archbishop of Canterbury (in a way the acting head of the Church of England and seemingly president of the meeting) Dr Rowan Williams with two other bishops at a press conference after the meeting. Dr Williams looked everything like a football coach sympathetically watching a match of his team from the bench, with nothing of the piosity of Alexis II (Moscow) or of the powerhungriness of JPII (Rome). The casual last two sentences in the previous paragraph signal this man for consideration for a black diary. In spite of his official (for conservatives: controversial) appointment as acting head of the Church of England this man looks rather like a senior member of his church. The adoption of this for me specific English word “senior” might help anarchist theoreticians out of the “We have no leaders” deadlock of unveracity. Because one cannot say that part of the people who call themselves anarchists do not follow the opinions or the advice or even the calls of other people who call themselves anarchists, some of whom find themselves often in that position, i.e. they would deserve the title (never given, of course) of senior militant.

Meanwhile the CIRA might have a look at Dr Williams’s writings to see whether some don’t deserve the A-in-a-circle quality stamp. As is shown by the outcome of the Anglican meeting, anarchist ideas are sometimes developed, enriched and practised in unexpected places. If, as Marianne Enckell says further on in her article, the anarchists have become more visible, it’s also because their surroundings have become more ready and willing to see them, and, probably, have become more anarchistic themselves. Could it be that the anarchists are just the voices of their masters, i.e. the public at large?

I reproduce the The Independent article as published in the paper version. The website version, probably prepared later, had a subtitle and a few paragraphs that were not in the paper version. They and an article contributed from New York on the next day reported that gay Gene Robinson and his prospective diocese actually refused to step back from the planned consecration. But in the conclusions of the meeting this possibility had already been foreseen, so that its materialisation is not important for the attitude the church people have developed at their meeting.

Contrary to predictions, the Anglican Communion stepped back from the brink of schism when its 38 primates issued a unanimous statement at the end of their emergency summit on homosexuality agreeing "not to act precipitately".

The outcome was a diplomatic victory for the Archbishop of Canterbury, Dr Rowan Williams. There are traditionally three outcomes to a church crisis: the Archbishop can crack down on rebels, capitulate to opponents, or offer a fudge. Yesterday Dr Williams did all three - and even drew a tribute from a leading anti-gay conservative, Drexel Gomez, the Primate of the West Indies, who praised "the inspired leadership given to us by the Archbishop of Canterbury". The lengthy statement offered something for everyone. There was an admonition to the US church for "short-circuiting" the procedures of the 70 million member worldwide Communion by electing an openly gay man, Gene Robinson, as Bishop of New Hampshire, and for the Canadian diocese which has instituted blessings for same-sex couples. Such moves, it said, "do not express the mind of our Communion as a whole and jeopardise our sacramental fellowship." But although saying that no province "has authority unilaterally to substitute an alterative teaching", it conceded that bishops must respect the autonomy of dioceses and provinces other than their own. Its chief practical measure was the establishment of a commission to consider the role of [the Archbishop of] Canterbury [as acting head of the Church of England and seen moiré or less of the Communion as a whole] in "maintaining communion within and between provinces when grave difficulties arise".

It will look, said Dr Williams, at "separation, new alignments and new jurisdictions. We need to look carefully at what our canons provide before we encourage such steps."

The primates also agreed for provision for anti-gay bishops to enter pro-gay dioceses to minister to dissenting minorities.

Intriguingly there were hints that pressure may be put on Gene Robinson to step down as bishop before his consecration on 2 November. His primate, Bishop Frank Griswold, was cagey on the subject. "All ordinations are provisional; it says 'God willing' on the invitations. Any number of things can happen," he said. "I am scheduled to be there on 2 November, I hope I will be there." But the statement, he added, would be "thought about very seriously by the people of New Hampshire and Gene Robinson".

Asked if he had betrayed Gene Robinson as he had Jeffrey John, who was pressurised to stand down as Bishop of Reading, Dr Williams said, "My primary duty is to the church whose unity I have to serve as best as I can."

Pressed for clarification the three primates, from England, the US and the West Indies, were gnomic in their responses. But it became clear that the two-day summit was not so much a seminar on homosexuality as one on where authority lay in the Communion. "Talk of winners and losers is irrelevant," said Dr Williams. "Our understanding has been very hard won; that's what makes our work together all the more significant. We've grown closer together rather than, as many predicted, further apart." How long a respite the Archbishop of Canterbury has bought for his Communion is unclear. His commission has 12 months to do its work. Whether those hardline anti-gay conservatives who were not in the primates' meeting will stay their threat to walk away is unknown. But the split which loomed at the start of the week appears to have been averted.