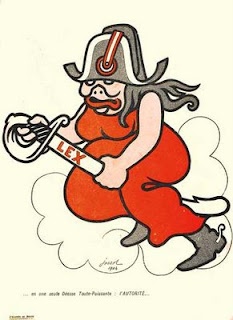 The example of an Islamic or Muslim anarchist I present in this issue is pretty weak because the man in question, baptised in the Roman Catholic Church as Gustave-Henri Jossot (Dijon, France, 1866 - Sidi Bou Said, Tunisia, 1951), didn't consider himself an anarchist and wasn't considered an anarchist by a knowledgeable person like Jean Grave, editor of the French anarchist weekly "Les temps nouveaux", to which Gustave-Henri Jossot contributed several caricatures. The problem is that to call somebody or oneself an anarchist (= somebody who rejects ruling others and being ruled by others) is something contradictory because, at least in practice, it means the person in question adopts or applies a set of ideas and models of behaviour fitting a certain pattern designed and, to a certain extent, checked by others. As Gustave-Henri Jossot once wrote to Jean Grave: "... you may as well admit that in your eyes true anarchists are people who think like you, isn't it?" (7 Oct. 1906).

For my purpose: to show the possibility of anarchism and religiousness going together in the same person, it's more convenient to consider whether the ideas, attitude and behaviour of a person fit the definition I chose for the notion "anarchist". One may object that a co-habitation of anarchism and Islam in the same person is contradictory and impossible from the outset as the word "Islam" means "submission". But religion is an expression of a person's view of reality, a very flexible and malleable thing, in the final instance something entirely individual. If a religion seems authoritarian it's because of the shape certain influential persons have chosen, and tried to impose on others. Other people may have other practices and attitudes and yet claim to adhere to the same religion. In the same way as somebody is an anarchist, a person is religious because s/he considers her/himself religious expressing her/his religiousness in certain acts or attitudes basically chosen by her/himself. Even if those acts and attitudes are imposed by others the person in question has chosen to submit to the diktat. Her/his attitude may be disapproved by other people claiming to hold the same beliefs and these may even exclude that person from their religious community but the person her/himself may still consider her/himself to be religious and, if s/he so wishes, to fit into a particular religious current.

In a first period of his life Gustave-Henri Jossot contributed caricatures and other drawings to several French publications, among them the anarchist publications "Les Temps nouveaux" and "l'Assiette au Beurre". Targets of his caricatures were the authoritarian family, the army, the courts, the police, the church, school. Michel Dixmier sees in this not a reflection of a coherent anarchist world view but a personal revolt against his upbringing in an authoritarian bourgeois family and a response to certain experiences. Nobody can deny, however, that his production as a whole reflected anarchist concerns.

In 1912, after the death of his only child, Jossot went through a mystical time during which he first turned to spiritualism and occultism, then back to the Roman Catholicism he had been brought up in, to end up as a Muslim in 1913 henceforth calling himself Abdou-l-Karim Jossot. Writing about the many reasons for his transition he mentioned among other things the falseness of Western civilisation and the simplicity of Islam: no mysteries, no dogmas, no priests, almost no ceremonies, the most rational religion in the world (in: La Depeche Tunisienne, 10 February 1913). What if he had read Maxime Rodinson's biography of Mohammed or Ibn Warraq's Why I'm not a Muslim? His transition to Islam doesn't seem to have been the outcome of a thorough study of the tenets and history of Islam and much a mere question of the heart. After his transition to Islam Abdou-l-Karim remained an enemy of the notion "fatherland" (although seemingly not on "anarchist" grounds: "to start Islamic fatherlands is betraying Islam"), he demanded equal incomes for all and continued to reject political action, violence and school ("school deforms the brain"); he also rejected social action considering that improvements were possible only on an individual level.

These elements do not constitute what one might call a complete set of anarchist ideas but they show at least that independent thinking and acting are possible in Islam, perhaps at the risk of one's life if powerful or otherwise influential Islamic theologians disagree with the outcome of such thinking. (My idea is not that anarchism can go together with orthodox forms of religion.)

"Submission to Allah", which is the essence of Islam, doesn't conflict with anarchism if one considers that in practical life submission to Allah is "to live one's convictions", which may or may not coincide with the convictions of other people claiming to be Muslims

. Sure, somebody who would have read and considered both Islamic writings and writings critical of Islam seriously and yet had stuck to Islam on explicit rational grounds and had equally consciously embraced anarchism would have served the purpose of my bulletin better. Perhaps this weak example will induce some reader to point me to the better example(s) s/he knows?

As usual, this issue of my Religious anarchism bulletin is not the fruit of thorough studies but entirely based on the book Jossot by Michel Dixmier (No 23 in the series Cahiers de l'art mineur published by the associations Limage and Vent du ch'min, Paris & Saint-Denis, s.d.). The book consists far more of reproductions of drawings and paintings than of text: of the 128 pages only 17 consist mainly or exclusively of text and out of them 4 pages just list works by Gustave-Henri / Abdou-l-Karim Jossot.