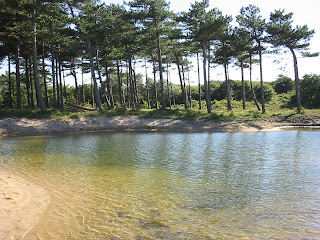 [For those seeing this on Facebook: this is André micside...].

In the operating theatre a nurse asks me whether I am nervous and whether I have trust in the success of the coming operation. Yes I am nervous, no I have not much faith in the possible result of the operation. Have gone through too many therapies already in the past three years. "Then why are you doing this?" You can hardly call this an appropriate time to ask such a question, so I make an impatient gesture with my left hand which shakes off one of the tubes already attached to me. Get on with it. In case anything goes wrong I even have meditated upon Matth. 22:23 sqq. - it will be under full anaesthetic.

Just concentrate on something nice, a place you love for example, I am told - quickly I move to a place where I love to read and meditate and watch some wildlife, a place I have not visited for about two years - most un-Hollandish landscape of landscapes in Holland - the anaesthesist gives an injection in my right hand which is supposed to make me drowsy -

when consciousness returns it remains dark. My eyes are covered with a thick layer of bandage which just allows me to conclude the sun is shining. You do not really sleep when you are forced to lie in darkness. I wonder if the sense of being stared at can be active when you temporarily lose this one very important sense. I think it cannot. Then again, who would have liked to watch at the moments I have to take out for myself and which are very frequent thanks to the infusion still attached to my right arm (I feel). But when my beloved enters the room I know it before she speaks - hearing? sensing it some other way? The hospital relies on her to spoon-feed me with the first real meal of the day. Have to ask again how it feels to visit someone who has his eyes locked away. "Pitiful" is the answer I just got.

The light hits hard when the bandage is removed. It looks like I will not be able to read The peaceable kingdom, about the Inner Light of the Society of Friends. I can read text messages though - one of them asks for a protest signature for a "prisoner of conscience" in Iran. How thoughtful of Amnesty International to support the Civilised World in its campaign against that foe of Israel's since the days of Esther or earlier. A campaign which may end in a nuclear attack.

During the day I manage to read about the Inner Light. The Quakers are presumably the only fraternity/sorority surviving of the English Revolution - the episode when Christian anarchism emerged.

Dusk presents me with two suns setting into the North Sea (some thirty miles away from the hospital). I gather the one on the right was the real source of light (judging by the time of year).
When I decide to go to sleep I notice that closing my eyes does not make the world go dark. It is lighter with eyes closed than with eyes open. In this strange light I see the letters of the book I was reading getting ordered into the shape of a cross - like the one in the centre of the Swiss flag (after which the Red Cross was designed).
A very strange experience to see this inner light, called forth by the pressure on my eyes which still seems to work even though the bandage has been removed.
No, I am not insisting on any Interesting Experience. It has a very material explanation - frightening as it is, though. Fortunately it lasts for only one night. The bright white cupola and the printed letters have disappeared. Together with the second sun.

Finally back at the keyboard looking for the AI-prisoner I come across a photograph of the person who is supposed to co-ordinate themes like this at Amnesty International. I spent three years of my life with her and this is the first time I look into her face since she wrote me off with a call (you might say I was taking it hard....).
Another confusing and frightening experience. Challenging me to think about what love really means.
Anyway, I signed the petition.

I am thankful for those who prayed for me this past year or longer.
I am equally thankful for those who did not or forgot about it. This, I think, is one thing I learned about love.
It looks like the operation has succeeded and it just might not need any sequel.
Which means my regular work on Christian anarchism might be resumed shortly. You should be able to notice it.
Ready to serve the God of the living....