Dying to get better 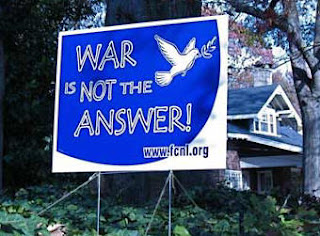 Chris Hedges, the author of the beautifully titled I don't believe in atheists wrote this inspiring piece on the G-20 meeting in Pittsburgh Pa.. Note that the starting place is the Thomas Merton Center:

The international power elites will go to Pittsburgh to preach the mantra that globalization is inevitable and eternal. They will discuss a corpse as if it was living. They will urge us to remain in suspended animation and place our trust in the inept bankers and politicians who orchestrated the crisis. This is the usual tactic of bankrupt elites clinging to power. They denigrate and push to the margins the realists—none of whom will be inside their security perimeters—who give words to our disintegration and demand a new, unfamiliar course. The powerful discredit dissent and protest. But human history, as Erich Fromm wrote, always begins anew with disobedience. This disobedience is the first step toward freedom. It makes possible the recovery of reason.

The longer we speak in the language of global capitalism, the longer we utter platitudes about the free market—even as we funnel hundreds of billions of taxpayer dollars into the accounts of large corporations—the longer we live in a state of collective self-delusion. Our power elite, who profess to hate government and government involvement in the free market, who claim they are the defenders of competition and individualism, have been stealing hundreds of billions of dollars of our money to nationalize mismanaged corporations and save them from bankruptcy. We hear angry and confused citizens, their minds warped by hate talk radio and television, condemn socialized medicine although we have become, at least for corporations, the most socialized nation on Earth. The schizophrenia between what we profess and what we actually embrace has rendered us incapable of confronting reality. The longer we speak in the old language of markets, capitalism, free trade and globalization the longer the entities that created this collapse will cannibalize the nation.

What are we now? What do we believe? What economic model explains the irrationality of looting the U.S. Treasury to permit speculators at Goldman Sachs to make obscene profits? How can Barack Obama’s chief economic adviser, Lawrence Summers, tout a “jobless recovery”? How much longer can we believe the fantasy that global markets will replace nation states and that economics will permit us to create a utopian world where we will all share the same happy goals? When will we denounce the lie that globalization fosters democracy, enlightenment, worldwide prosperity and stability? When we will we realize that unfettered global trade and corporate profit are the bitter enemies of freedom and the common good?

Corporations are pushing through legislation in the United States that will force us to buy defective, for-profit health insurance, a plan that will expand corporate monopolies and profits at our expense and leave tens of millions without adequate care. Corporations are blocking all attempts to move to renewable and sustainable energy to protect the staggering profits of the oil, natural gas and coal industries. Corporations are plunging us deeper and deeper as a nation into debt to feed the permanent war economy and swell the military budget, which consumes half of all discretionary spending. Corporations use lobbyists and campaign contributions to maintain arcane tax codes that offer them tax havens and tax evasions. Corporations are draining the treasury while the working class sheds jobs, sees homes foreclosed and struggles to survive in a new and terrifying global serfdom. This has been the awful price of complacency.

Protests will begin several days before the summit. Many of the activities are being coordinated by Pittsburgh’s Thomas Merton Center. There will be a march Sept. 25 for anyone who, as Jessica Benner of the center’s Antiwar Committee stated, “has lost a job, a home, a loved one to war, lost value to a retirement plan, gotten sick from environmental pollution, or lived without adequate healthcare, water, or food. … ” There will be at least three tent cities, in addition to a Music Camp beginning Sept. 18 that will be situated at the South Side Riverfront Park near 18th Street. Unemployed workers will set up one tent city at the Monumental Baptist Church on Sept. 20 and five days later will march on the Convention Center. The encampment and the march are being organized by Bail Out the People Movement (BOTM). The Institute for Policy Studies, The Nation magazine, the United Electrical, Radio and Machine Workers of America (UE), Pittsburgh United and other organizations will host events including a panel on corporate globalization featuring former World Bank President Joseph Stiglitz, along with a “People’s Tribunal.” There will be a religious procession calling for social justice and a concert organized by Students for a Democratic Society.

But expect difficulties. The Secret Service has so far denied protesters permits while it determines the size of the “security perimeter” it will impose around the world leaders. Pittsburgh has contracted to bring in an extra 4,000 police officers at an estimated cost of $ 9.5 million. Activist groups have reported incidents of surveillance and harassment. The struggle to thwart the voices of citizens will be as fierce as the struggle to amplify the voices of the criminal class that is trashing the world’s economy. These elites will appear from behind closed doors with their communiqués and resolutions to address us in their specialized jargon of power and expertise. They will attempt to convince us they have not lost control. They will make recommitments to free-trade agreements from the General Agreement on Tariffs and Trade, or GATT, the World Trade Organization and NAFTA, which have all thrust a knife into the backs of the working class. They will insist that the world can be managed and understood exclusively through their distorted lens of economics. But their day is over. They are the apostles of a dead system. They maintain power through fraud and force. Do not expect them to go without a struggle. But they have nothing left to say to us.

“Those who profess to favour freedom, yet deprecate agitation, are men who want crops without plowing up the ground,” Frederick Douglass wrote. “They want rain without thunder and lightening. They want the ocean without the awful roar of its many waters. This struggle may be a moral one; or it may be a physical one; or it may be both moral and physical; but it must be a struggle. Power concedes nothing without a demand. It never did and it never will.”

If you can, go to Pittsburgh. This is an opportunity to defy the titans of the corporate state and speak in words that describe our reality. The power elite fear these words. If these words seep into the population, if they become part of our common vernacular, the elite and the systems they defend will be unmasked. Our collective self-delusion will be shattered. These words of defiance expose the lies and crimes the elite use to barrel us toward neofeudalism. And these words, when they become real, propel men and women to resist.

“The end of something often resembles the beginning,” the philosopher John Ralston Saul wrote in “Voltaire’s Bastards.” “More often than not our nose-to-the-glass view makes us believe that the end we are living is in fact a new beginning. This confusion is typical of an old civilization’s self-confidence—limited by circumstances and by an absence of memory—and in many ways resembling the sort often produced by senility. Our rational need to control understanding and therefore memory has simply accentuated the confusion. … Nothing seems more permanent than a long-established government about to lose power, nothing more invincible than a grand army on the morning of its annihilation.”