How I will be voting in the 2010 UK General Election 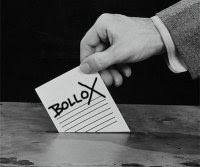 This run-up to the general elections has made me feel reasonably reminiscent, though not necessarily in the fondest of ways. I am reminded in particular of last summer's European elections, which as everyone knows by now were conducted by proportional representation, ie, smaller parties actually had a real chance of gaining seats to represent Britain in the European Parliament. If the emphasis on getting out to “use your vote” was always high in different elections, it seemed especially so in 2009 when it seemed that the neo-fascist British National Party, who had up to this point only really been a minor threat on the fringes of the political radar, were now likely to gain hideous prominence.

And yes, worst fears did come to pass as the BNP gained their two seats, one of them being in my own region of the North-West. For well over a month up to that point, I had personally been agonising over whether I was going to vote or not. If someone had asked me not even three months earlier, I would have been firm in my resolve: I do not vote, because my primary allegiance as a Christian is to the Kingdom of God, and not to any of the kingdoms of this world. At the time, however, as public concern began rising so did mine rise along with it, particularly as I was working alongside asylum seekers and refugees, and therefore alongside persons who stood to lose the most if the BNP ever had a significant say in the running of the nation. It seemed like there were few options left but to fight fire with fire: I went to the ballot and voted for the Green Party, not because I believed in them or felt allegiance to them, but because I felt they were the most effective option to keep the BNP from gaining seats. My gesture was one of protest rather than pledge, of mere damage control and nothing more.

After the results, as I listened to the woes of others who saw the low-voter turnout as the principal cause, I couldn't help but think about the ways in which the mainstream political parties have failed the people living under them. To paraphrase a good friend of mine, the BNP is effectively a monster of the government's creation, albeit an inadvertent one. It was, after all, the Labour government who took this country to war in Iraq and who have since contributed to the militarisation of that nation as well as the bombing of its citizens. Similarly, it is the Labour government whose policies on immigration are abhorrent to the extent that people seeking asylum are subjected to an oppressive legislative system, in some cases even being locked up in detention centres without word of warning or reason. While all this happens, this government has for the last 13 years consistently failed and abandoned the poorer communities of the UK; housing deprivation and unemployment soar, and within the recession the hot topic of immigration is utilised as a political scapegoat. “British jobs for British workers,” an explicitly racist phrase now appropriated by the BNP, originated as a Labour Party slogan.

It might sound like I am going off on an overly-cynical rant. Others might tell me to be more optimistic and own a political voice which addresses these issues. It's not just that, however, it comes down to this: I simply do not believe in centralised power of any form. I have good friends who are intending to vote Labour in this election to try and keep the Conservative Party out. I understand this position, I even respect it. To my mind, however, they are but two sides of one coin. For the reasons I have outlined above and more aside, I simply could not in good conscience vote Labour, and I consider that to be deeply personal, due to how much that government has hurt those who were (and still are) very important to me.

To extend this further to take into account other political options; well, on a purely pragmatic level, this first-past-the-post system of ours tends to void the significance of other votes cast for smaller parties, which is a sad sign of the broken electoral system in the first place. On an ideological level, however, none of these parties represent me, and it really is as simple as that. I say this not with a heavy heart, but as someone who did take their fight to the ballot box and was afterward able to fully appreciate it for what it is: a concession to the powerlessness of the general public. Moreover, no elected government could stand for the values I personally hold as a follower of Christ: of nonviolence and the perfect justice of people brought together into fair and equal relationships with one another. No government could legislate that because it would fail at the very moment of trying. Political seats, militarism, policing, and arms trading are all signs of uneven, oppressive, and subjugating power.

I do not consider voting, in and of itself, to be an effective drive for social change. To me, this comes from other areas which are far more prominent and powerful: from social movements, campaigning and lobbying networks, trade unions, cooperatives, community organisations, churches, direct action, civil disobedience, and more aside. The potential for powerful social change comes from people, not from government, and I believe that is a principle which has manifested very clearly and consistently throughout history. Voting can sometimes be a means to an end, but it is not nearly any substitute for revolutionary tactics.

So after all of this rambling, the question is, am I going to vote in the 2010 UK General Election? Well, yes, I am. With a spoiled ballot, expressing very clearly and literally that I am voting for none of them at all.