Notes from the soupline - Part One 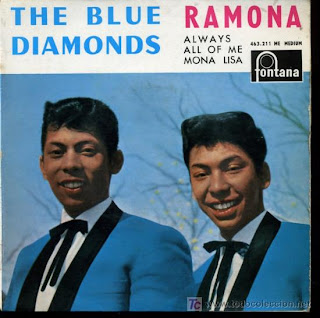 When I left for Las Vegas I did not realize that nights could be cold, and especially that high up in the mountains the weather would still be chilly. So one of the first things I had to do after arriving was to get a jacket, the kind of clothing I did not think necessary - the contrast with the weather in Western Europe would be too big anyway.

Sr. Megan took me to a thrift store atached to a Lutheran church which looked like a monastery - and thrift stores belonging to churches over here really are thrift stores. For five dollars I got a jacket I immediately fell in love with - it reminded me of Indorockers like the Tielman Brothers or the Blue Diamonds. When I presented myself on A Pinch Of Salt it was with spinning an Indorock record. A real Indorocker jacket. Phew wow!
(Chances were I would even wear it at a possible wedding ceremony, which  I did - it is one of the Must-Do-Things in LV, NV. We did it in the chapel of the franciscan house we are staying in, between washing the dishes and the coffee before turning in for the very early tour of duty).

When I looked at the inside I noticed the jacket was Made in Indonesia. An ironical (and sad) detail. Sweatshop clothing real Indo-style.

We show up in the early morning at the Catholic Worker House LV where preparations are made for the soupline of the day. "Where' you guys from?" asks a CW with a southern drawl. "From Hulland," we have to say ("Holland" makes no sense, it sounds too much like Poland, the politically correct Netherlands is too tedious and most of the time needs more explanation - so we learned to pronounce the country's name as if it were the surroundings of Hull). Yes, it is pretty decadent to come all the way from Western Europe to hand out meals to the poor of Las Vegas, to the ambassadors of God as Peter Maurin calls them, quoting classical Greek sources. It is not the only thing we arrived for but it is part of the activities. 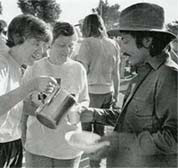 And how is meeting the ambassadors of God? I can assure you it does not feel special. In fact, they look a lot like you and me. And digging up spoonfuls of spaghetti from a deep pan in the strong desert wind has its own problems. Drops of sauce are flying all around. Most of them land at the clothing of the person digging for the soup. Here you can get an idea of the size of these pans. They are stirred on the spot by a canoe oar.

My sweatshop Indojacket had to be dry-cleaned after the spaghetti serving.
At the appointed date and time it is not ready. I am told it is silk and needs an extra turn to remove the soup stains. Silk? Another embarrassing detail. So it is not even vegetarian?

Neither are the meals in the soupline, by the way.
(to be continued)