I made it a very short one with a shortcut definition because a) I consider definitions to be un- or anti-dialectical, which to me is the only valid approach to social and spiritual phenomena; b) it may include so-called right-wing Christian anarchists of the type called libertarians, who especially in the USA often identify themselves with Christianity too. If we aim to make peace the description has to be inclusive. All the names mentioned are however - apart from Kierkegaard - of the socialist-anarchist type.

When I started out on the journey of discovery of Christian anarchism I thought German and French would be the most relevant European languages for this subject, apart from Dutch.
There is a good Wikipedia article on the subject in French, the German is even shorter than the Dutch entry as I wrote it.

I now present a translation into English, probably the main language of reference on this subject nowadays, with the perhaps illusory idea of offering a possibility to those who mutter that Christianity and anarchism cannot be combined to get in touch with the people referred to below. Yes, most of them are males - it will take some time to change that too.

The reason to draw this piece from the draft mode is mainly the publication of the first introduction on the philosophical/theological tendency in English (the first in any language as far as I know). And on the other hand a reason is a coming across popular misunderstandings about anarchism as the pursuit of disorder.
(The [in-]famous encircled A actually is an abbreviation of Proudhon's maxim "L'anarchie c'est l'ordre". Anarchy is order).

The shortest possible description of anarchism might read: the pursuit of the largest possible order with the least enforcement possible. Christian anarchists appeal in this pursuit to (elements of) Christianity, referring mainly though not exclusively to passages from Isaiah and Mica and especially the Sermon on the Mount.

Christian anarchists often refer to predecessors throughout the entire history of Christianity. Since it is really only sensible to use the term anarchism relating to the modern state this might better be done when referring to Christian anarchism. The combined phrasing was introduced by the specialist in gnosticism Eugen Heinrich Schmitt, relating to Lëw Tolstoy.

At the dawn of the modern state thinkers such as Petr Chelčický, Hans Denck, Sebastian Franck, the Familists, Labadists and English revolutionaries as Gerrard Winstanley and Abiezer Coppe may be referred to as being actual predecessors.
In the past two centuries Christianity and anarchism or the rejection of the state were in some way combined by:
Adin Ballou
Søren Kierkegaard
Leo Tolstoy

Tolstoy was inspired by the Doukhobors who in turn were supported by Tolstoy.

From the English tolstoyan circle around the journal New Order the most well-known author is Ebenezer Howard, the theoretician of Garden Cities.

For the Netherlands may be referred to Felix Louis Ortt. [illustration 1]

In the United States of America in 1933 the Catholic Worker movement was founded by Dorothy Day and Peter Maurin. The movement combines fidelity to ecclesiastical Roman Catholic hierarchy with explicit anarchism. 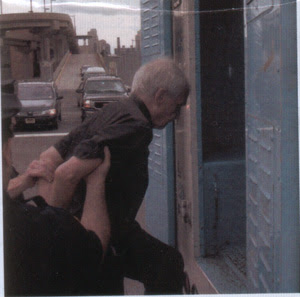 Karl Barth, the most important protestant theologian of the twentieth century, politically tended towards anarchism. The development of his theology however makes it difficult if not impossible to connect him to other thinkers mentioned above.