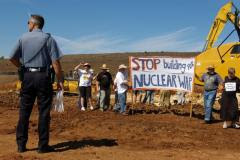 Singing choruses of “We shall not be moved” while scattering sunflower seeds, 14 activists were arrested in Kansas City, Missouri, Aug. 16 after blocking an earth moving vehicle on the site of a proposed nuclear weapons manufacturing facility.

The acts of civil disobedience came at the end of a three-day conference which drew peace activists here from around the nation. The efforts were aimed at building awareness of and resistance to the construction of the weapons plant, which will replace an existing plant here.

Before their arrest the protesters walked onto a soybean field being plowed by several earth moving vehicles as part of the plant building preparation effort. The group, walking in a single file, held hands; some carried large signs. They approached and surrounded one of the vehicles, forcing the driver to stop her work, and eventually leading 20 other vehicles to halt theirs as well.

After about a 45 minute shut down, police arrived, announcing the protesters had two minutes to leave the privately-owned grounds. The flurry of activity stopped all work at the site for over an hour.

This is the second time that people have been arrested for civil disobedience to the plant in two months. On Aug. 6 a local activist, Jane Stoever, was sentenced to eight hours of community service for having blocked the entrance to the current facility, known simply as the Kansas City Plant. Her action took place in June.

Currently a part of the Bannister Federal Complex, located about 13 miles south of the city’s downtown area, the Kansas City Plant is responsible for the production and assembly of approximately 85 percent of the non-nuclear components for the U.S. nuclear arsenal. The plant is due to be relocated in 2012 to the “more modern facility.”

Recalling her 30 years working at the current site of the nuclear weapons facility, Barbara Rice told those in attendance that she had lost count of how many of her colleagues had died of cancer after 110 passed away from various kinds of the illnesses.

While she said she couldn’t prove that the deaths were related to chemical exposure at the current facility, Rice remembered one instance when a pipe burst at the plant and her supervisors told her to “go home immediately and destroy her clothes.”

Coghlan said that while the international community thinks the U.S. is working towards nuclear disarmament, "the reality is that we’re building 3 new sites: one to process uranium, one to process plutonium, and one to create the non-nuclear parts of the weapons such as triggers and fuses.”

While the new facility in Kansas City is expected to continue production of non-nuclear parts for nuclear weapons, the Chemistry and Metallurgy Research Replacement Project at Los Alamos plans to increase U.S. capability to produce plutonium pits, the core of a nuclear weapon, according to Coghlan. Meanwhile, the facility at Oak Ridge plans to reinvest in its capability to produce uranium components for the weapons.

In the original proposal for the Kansas City project, CenterPoint Zimmer LLC — the company which won the bidding process to design and build the plant for the NNSA — said the new facility would simply modernize operations for nuclear weapons parts production while ensuring the continued employment of “a minimum of 2,100 workers at the campus in good ‘quality jobs.’ ”

The day before the arrests the activists visited the two Kansas City Plant sites for prayer and reflection.

After walking with the rest of the activists on the side of a busy street where the current plant is located, Japanese native-born Mercedarian Sr. Filo Hirota told those gathered that she envisioned a new world order in which the “principle of nonviolence is translated into the way how the world is organized.”

Hirota, who is the international relations officer for the Catholic Council for Justice and Peace of the Episcopal Conference of Japan, asked in a prayer following her brief talk for an economy “that creates communion in equal and just relationships.”

Arriving in a caravan at the field where the new facility for the nuclear weapons plant is under construction, activists came together there near idle bulldozers where they blessed the land and asked forgiveness in view of its future use.

Tom Kascoli, a Native American of Apache and Navajo background, blessed each of the assembled, waving an eagle’s feather over a burning sage stick while chanting a prayer in his native tongue.
[National Catholic Reporter]