A thought for the day, August 6th 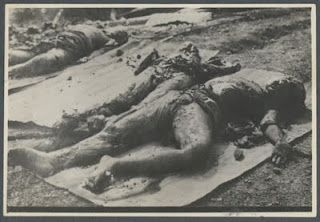 This is an elaboration of an introduction I wrote earlier on, elsewhere. It is in the spirit of Herbert Marcuse's One dimensional man, a book that deals in its entirety about the unbearable situation of living "as if normal" whilst the human-made death of all of humanity is being prepared. The metaphors of generation etcetera fulfill a certain ideological function: it further "normalizes" living alongside mass murder. Also cf. "sitting duck" and "barrel of fish" as references to the bombing drones.

Until I started writing this piece I did not know about a "mother of the bomb".
Killing machines apparently also have cousins and other family members.

When you ask the internet search engine for the “father of the bomb” you get the incredible result of around six million hits. One of the first results you may get reads: “Trinity and the birth of the bomb”, which indeed goes on about the “father of the bomb”. There is a good chance you will accuse the writer of the text you now see of blasphemy when you are kindly reminded of the combination of the words trinity, birth and father. Words used in connection with a device that killed about a hundred thousand people in one instant, and another hundred thousand in the slow aftermath of the bombing of Hiroshima.

When such a combination yields about six million hits this must mean “we” have accomodated to these weapons. Generally they are called weapons of mass destruction these days, which refers to damage done to buildings and other lifeless things. You do not hear the phrase weapons of mass killing. And apparently “we” accept the idea of these weapons “having been born”, they have “a father” and they have to be modernized once in a while. Then we hear about the next “generation of nuclear bombs” (about one hundred thousand hits in the search engine). Born, father, generation – all words referring to life, the ending of which is the specific aim of these weapons. If you think it unfair that the “mother of the bomb” is not mentioned you are right: she “only” gets three million hits in the search engine.

Since it refers to an insect it probably will be even harder to see the full obscenity of a killing device, the unmanned aerial vehicle, named drone. The main task of drones, male bees, is indeed: fathering. We are up to see a new generation of drones, which will be more stealthy than the present day unmanned killing device.

Let us be aware that bombs and unmanned bombing devices are directed against fathers and mothers, against those who are born and against generations. And let us remember that the most obscene about these things is still not the words used about them. It is the fact that they exist at all, that they are used or that using them is even being considered.