Slaughtering anarchists by the myriads 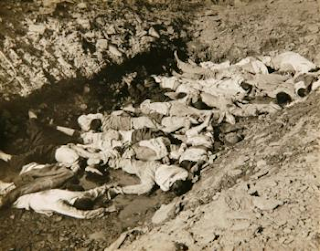 A story that came across to me by chance, as it goes with the net. It is not "news". But it is a story that leaves you devastated in the metaphorical sense. And it is fitting to this season of
remembrance .

The commission estimates at least 100,000 people were executed, in a South Korean population of 20 million. That estimate is based on projections from local surveys and is "very conservative," said Kim. The true toll may be twice that or more, he told The Associated Press."

In 1945, as the Japanese Empire finally went into retreat, the Korean people were left without an occupational authority for the first time in decades. In that brief moment something amazing happened. The Korean Anarchists, long the champions of the resistance struggle, came out of the woodwork and formed a nationwide federation of village and workers councils to oversee a massive project of land reform. Korea graduated from feudalism overnight. Aside from some struggles with the Socialists and Nationalists, the peninsula was at peace.

When WWII concluded, however, the "responsibility" of securing peace and order in Korea was assigned to the Americans and Soviets. By all accounts in this instance the US actually had no imperialist intentions. While the Soviets moved quickly to deploy their forces and occupy the North, the Americans took their time showing up, and were largely content to let the South Koreans manage themselves.

The Koreans, culturally steeped with anti-authoritarian values, were fond of America and openly despised the Soviets. While a few socialists fled North hoping that the Soviets would give them a hand against the Anarchists, they were overwhelmed in numbers by a mass migration south. Everyone assumed the Americans would assist or at least respect their autonomy.

This did not last.

The Americans Military commanders who eventually arrived had trouble understanding or dealing with the anarchy they found. They had no protocol for dealing with regional federations and autonomous communes. So they helped the dispossessed aristocracy form a military government. In order to make the map "simple." In order to "get things under hand."

Most importantly they did not understand that the Korean Anarchists and Anti-Authoritarian activists that saturated the countryside were different than--and in fact vehemently opposed to--the Communists, going so far as to organized and launch insurrectionary attacks on the Soviet Occupation before the Americans arrived.

The Americans couldn't understand "anarchists". But "leftists", they knew, meant Soviets. And they had the gall to ignore or resist their puppet military government. So they started killing them.

By the start of the Korean War, the slaughter was in full swing. Having arrested every anarchist organizer or sympathetic peasant they could get their hands on, they started executing them en masse.

The Korean Anarchist movement was, historically, one of the strongest in the world. It survived half a century of brutal occupation and economic exploitation. It survived a three way assault by the Chinese, Japanese and Soviets. It has survived many, many massacres and exterminations. It is even still around today. So strong that in the last few years they've been known to evict the police from the streets. But the worst injury it ever suffered was initiated and orchestrated by the United States military. In a single campaign so horrific it borders on genocide.

This was truly, objectively, one of the worst things the US has ever done. And there are some big ffing contenders.

Most North Aamerican papers ran front-page stories this Monday about the latest mass graves being uncovered while I was riding the "Empire Builder" from St. Paul to Portland. I found a copy wedged between Amtrak seat cushions. And there was an ancient photo of piled corpses as far as the eye could see. The papers euphemistically used the term "leftists." But I know the history, I did the research.

They were almost all anarchists.

However lovely America may be. Remember, the US government is not our friend. It will never be. It can never be.