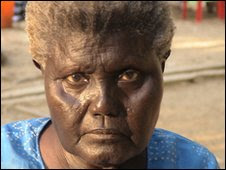 Just when I wanted to start writing about the apparent need for white Europeans to see (tropical) islands as pieces of paradise on the one hand, and the wish to end this condition as harsh and as quickly as possible on the other hand, I hear the news of the passing of Boa Sr, the last person to speak Aka-Bo, a language of Great-Andaman. The news item pictures the language as one of the oldest in the world, which sounds like a wild guess and which does not make the loss worse. A loss which depends on the fate of the people that spoke it.

The islanders were marginalised at their own place. The Danish sold the islands to the United Kingdom as if they were entitled to do that, and the UK acted like it was entitled to make it a penal colony for people from India, where the UK acted like an entitled power too. The original people have been deported to an islet which is meant as a reservation, the archipelago is being prepared as a tourist destination. Guess who will be visiting...

More about the people of the Andaman islands here and here (in a sense disturbing pictures welcoming you).