Who would Jesus shoot? - the sequel 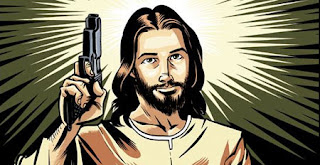 
The Australian Defence Force has swiftly removed biblical references from soldiers' gunsights manufactured by US company Trijicon. The gunsights, which some US Army commanders have dubbed ''spiritually transformed firearm[s] of Jesus Christ'', have scripture references stamped next to their serial numbers.
These revelations have once again raised questions over the connection between religion, particularly Christianity, and violence. As a Christian and a church leader I could not be more appalled at the distortion of Christianity these inscriptions represent. It seems timely then to make a solid defence of the non-violence of Christianity. As the great Indian independence leader, Mahatma Gandhi, said: ''Jesus Christ is the most perfect example of non-violence in history,'' and paused before adding, ''And the only people who don't realise this are Christians.''

Of course, there have been times throughout history when people have invoked the name of God or Jesus to justify their violence. However, this should not be confused with genuine Christianity, even when it is sanctioned by high ecclesial authorities.
The Christian church remained faithful to the non-violence of its founder for the first 300 years of its history, as even those in the military who converted refused to bear arms. It was only when Christianity became imposed by Emperor Constantine in the 4th century that Cicero's ''just war'' theory was adapted to justify Constantine's plundering.

Non-violence itself is often mistaken for passivity. This is a misnomer - one must be actively engaged in the struggle against violence and oppression to be non-violent. Non-violent people not only refuse to threaten, hurt or kill those who oppose them, but they actively engage the other's humanity, seeking their opponent's transformation as well as their own and those they defend. This is what the church was intended to be - a non-violent army transforming the world not with a gun, but with active love.
However, non-violent action sometimes raise tensions or causes disruption to the status quo, as Jesus frequently demonstrates. While he overturns the tables in the temple and drives out the sheep and cattle (saving them from being sacrificed), he never hurts anyone. But he is absolutely not passive.
His teachings also consistently bear this out. ''Love your enemies and pray for those who persecute you,'' Jesus taught. ''Put down your sword; those who live by the sword die by the sword.'' One wonders what might have been had Trijicon's gunsights been inscribed with these verses.

Even Jesus' teaching on ''turning the other cheek'' has been misunderstood. As biblical scholar Walter Wink shows, this command is actually creative non-violence at work. ''If someone strikes you on the right cheek,'' Jesus says, ''turn the other also.'' With the left or ''unclean'' hand unavailable to a 1st century Jew for anything other than toilet use, one person striking another on the right cheek could only mean giving a backhanded slap. Such a blow is symbolic - in a hierarchical system it is intended to maintain domination over a social subordinate. But Jesus' advice is clear - if someone attempts to treat you as less than an equal, turn the other cheek. By so doing, you invite them to strike a blow with a fist - a blow only inflicted between equals - or to back down altogether.

But the heart of Christianity's non-violence is the death and resurrection of Jesus. Refusing to defend himself with violence when his accusers come to arrest him, Jesus goes so far as forgiving those who kill him. But for Christians it's the resurrection that drives the commitment to non-violence - not only does it vindicate Jesus' non-violent way, but it proves that even death is no barrier to God.

Of course, faith in the resurrection (or any religion for that matter!) is in short supply these days, but it is not required for non-violent movements to succeed. This way of accepting suffering rather than meting it out has seen non-violent movements all over the world win justice for their people: from the US civil rights movement, to people power in the Philippines, the colour revolutions in Eastern Europe to the Norwegian and Bulgarian resistance to Nazism.

It remains clear that those who claim to follow Jesus cannot do so while ignoring his commands, let alone the way he lived. As my friend Jarrod often says, ''killing for Jesus makes about as much sense as shagging for celibacy.''

The final sentence sounds familiar - was it not about fighting for peace etcetera? The author is puzzled about the consistent changing of the spelling nonviolence into non-violence in the above.

We wrote about this earlier.