If all else fails, arrest them 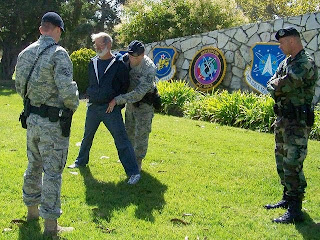 A small group of demonstrators were not allowed to stand outside of  Vandenberg Air Force Base (VAFB) in Lompoc, California around 1 pm on
Sunday, January 31. They came to voice opposition to a U.S. test of part of an anti-ballistic missile system. In the first test of its  kind involving Vandenberg, an ICBM launched from the Marshall Islands  was aimed at southern California. The Ground-Based Interceptor  launched from VAFB, about 60 miles northwest of Santa Barbara, lifted
off at around 3:45 pm, but it did not succeed in shooting down the target which was launched six minutes earlier from the other end of
the Ronald Reagan Test Range. One of the “anti-testers” required ambulance transport before processing after being injured by the
military police. No one crossed the line outside of the main gate, and
people were not allowed to stay, even in the designated protest area.
8 of ll participants were arrested. First to be cited were two people
with existing “ban-and-bar” notices from previous arrests and
detainments. MacGregor Eddy of Salinas and Dennis Apel of Santa Maria,
were cited immediately, even though they didn't cross onto base
property, were in the designated protest area and identified
themselves as instructed.
The eight were cited for a “Violation of Security Regulation.” Apel
and Eddy were additionally cited for trespassing even though they
didn't cross the base's painted line. When asked why she was given two
tickets, Ms. Eddy was told by one of the the arresting officers, “One
is for showing up and one is for being here.”

A woman in her 80s, Jude Evered of Goleta, CA was held on the ground
by two security guards with one soldier's knee in her back. Her
booking was interrupted because she had to be taken to the hospital in
an ambulance for a shoulder injury she sustained after she was already
in custody. Evered, is with the Women's International League for Peace
and Freedom and is a frequent participant in weekly vigils there. She
was later released, unprocessed by authorities, nor had she been
escorted by police or military police to the hospital. Dennis Apel commented,
“What they did to Bud (Boothe, another octogenarian and longtime
Vandenberg Action Coalition member from Los Olivos) in November was
also harsh.” At the time MPs spun Bud around by his handcuffed arms,
cutting him in three places.

Jorge Manly-Gil of Guadalupe, CA refused to give any information. He
was last known to be held at the Lompoc City Police holding cell.
“They completely dismantled the demonstration,” said long-time
organizer MacGregor Eddy. She went onto reiterate that the base was
told well in advance of the demonstration which was initially
scheduled for January 21, as was the interceptor test, both of which
were grounded due to large southern California storms at the time.
Anyone not arrested were given their own ban-and-bar letters even
though they were in compliance with base policy. The question that no
court has been able to hear, much less decide is whether or not such
notices can legally be applied outside of the fenced area of the base.
The reason is that the prosecutor has never prosecuted any such cases
for a court to decide. For many years, the southern California ACLU
has refused to assist long-standing peace vigilers in the past. A
lawyer and legal observer was on site on Sunday, and there is renewed
determination for base protest policies and questions of jurisdiction
to be resolved in court, even if private attorneys need to be retained
and the southern California ACLU remains seemingly indifferent to a
clear violation of the First Ammendment rights to speak and gather.
Since November, the new base commander has decided to require I.D.s
from demonstrators. No one else on the public side of the “green line”
is required to show anything. Showing I.D.s on Sunday did not grant
the ability to demonstrate, but rather resulted in the issuance of ban-
and-bar notices.
International opposition to U.S. missile tests is building, whether
they're testing ICBMs or interceptors. Demonstrators were carrying
letters of opposition to this test from six different international
organizations.

The following letter from the Western States Legal Foundation Director
Jacqueline Cabasso provides a concise summation of the issues being
raised by the demonstrators:
Western States Legal Foundation calls for cancellation of the planned
January 31 test launch of an interceptor missile from Vandenberg Air
Force Base at a simulated incoming Iranian missile launched from the
Marshall Islands.

The premise of this test is preposterous propaganda. Iran does not
have nuclear weapons, nor is there any convincing evidence that it has
an active nuclear weapons program. The test will only serve to
exacerbate tensions between the U.S. and Iran.
Further, U.S. development of missile defenses endangers prospects for
deeper U.S. and Russian nuclear arms reductions and threatens to
scuttle agreement on a follow-on to the START treaty. To add insult to
injury, every U.S. test launch from the Marshall Islands causes
tremendous environmental damage to surrounding land and water areas
and compounds the historical injustice to the indigenous Marshallese
people.

This is not a launch by Iran aimed at California, but rather a launch
by the U.S. military- industrial complex aimed at Congress and the
February 2010 Defense budget rollout.
The U.S. should pursue diplomatic efforts to normalize relations with
Iran. This test should be cancelled and it’s estimated $150 million
price tag redirected to humanitarian aid for Haiti.