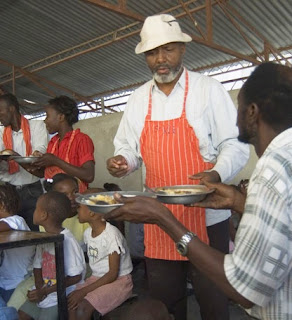 Fr. Gérard Jean-Juste gets a moving obituary in the SF Bay View [and he even makes me feel a bit happy because of his thank you-speech on Youtube at the bottom of the article, as I have written for the SF Bay View a few times myself].

The closing word of Bill Quigley's piece, ¡Presente! as it should have been written, refers to the days when the Chilean bourgeoisie led by general Pinochet showed its ugly face against the parliamentarian non-violent socialist transformation of Chile. ¡Presente! was a reference to those who had been tortured and killed in Chile and could only be present in spirit.

A shrill reminder of what has been going on for so long now in so many parts of the world, Haiti not being the least scourged nation. Fr. Jean-Juste apparently did not die from being tortured, but he knew what it was like in the dungeons of the mighty.
May he rest in the presence of the One he prayed to most.