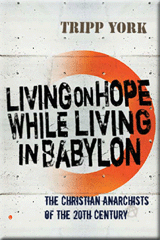 Let's face it: were you in Burlington, Tennessee on Sunday June 7th 2009? Neither was I.

You might fairly describe Burlington native Tripp York as a Renaissance man.

He's known for his acting and has worked as assistant technical director at Burlington's Paramount Theater. He has taught religion at Elon University for five years.

York has written three books, co-authored another and and has more on the way.

His latest is called "Living on Hope While Living in Babylon: The Christian Anarchists of the 20th Century." York will sign the book from 2 to 4 p.m. Sunday at the Barnes & Noble in Alamance Crossing in Burlington. He'll also sign two other books he has written: "The Purple Crown -- the Politics of Martyrdom" and a novella called "Anesthesia." He has also co-authored a book called "Calculated Futures: Theology, Ethics and Economics." His newest book examines the lives and activities of people York describes as "Christian anarchists." York builds the book around opposition to what the Rev. Dr. Martin Luther King Jr. called the "triple axis of evil:" materialism, racism and militarism.

These are people York says adhered to the standards of scripture as they understood it -- including a "literal understanding of the Beatitudes," which are part of Christ's Sermon on the Mount teachings -- at the expense of obeying the government, church leadership or other influences in society.

York said the people he writes about often received "greater criticism from the church than from the government." That may not be surprising, he said, given the example of Christ and others in scripture.

While Christ was executed by the Romans, he was "utterly despised" by some of the religious leaders of his time.

two priests who were listed on the FBI's Top 10 Most Wanted Lists due to their protests of what they believe was wrong with government and society; a Baptist farmer and Greek scholar kicked out of his church for working to integrate it racially; and the creator of a community that evolved into Habitat for Humanity.

York has been an instructor of religious studies at Elon for five years. He is about to move to Kentucky to pursue teaching, writing and theater opportunities.

He has more books in the works, including a children's book that tells stories from the perspective of animals in scripture.

York is a 1991 graduate of Williams High School. He earned an undergraduate degree from Trevecca Nazarene University in Nashville,Tenn., where he majored in religious studies and dramatic arts. He graduated with a master's degree in theological ethics from Duke University and earned a doctorate at Garrett-Evangelical Theological Seminary on the campus of Northwestern University in Illinois.

A review of sorts. Price listings vary and it can be found online at a much lower price.