Being invaded is for the Others 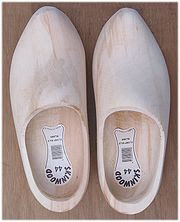 The English language has more borrowings from my language than both sides are generally aware of. Some of them I like and give me a warm feeling about my language, like iceberg and landscape (in the present sense). Others make me feel uneasy, like beleaguer, ordeal and - worse - boss. But the internationally best known makes me cringe, even though the system was developed in the Southern United States, originally. It is as Dutch as Dutch can be.
It is of course apartheid.
And it is such a telling word with such a way of thinking and acting hidden behind it that this saddening politician with his silly coiffure cannot be such a surprise. Especially when the Dutch foreign minister specifically asks to let this politician into Great Britain, and the New Labour regime refuses him entry.
Let in the representative of so many citizens of that exemplary democracy!
Hurray. "We" are Headline News. Automatically I start thinking of we even though there is very little in Dutch politics I can identify with (alright, I am a member of the Party for the Animals, I confess....).

And just one day after this event the site which usually is my starting point on the net, Antiwar.com, has as a headline on the Frontline news from the Netherlands. About the Invasion of The Hague Act. From this news item:

Odd as it may seem, the law allows the US to constitutionally send jack-booted commandos to fly over fields of innocent tulips, swoop into the land of wooden shoes, tread past threatening windmills and sleepy milk cows into the Dutch capital – into a city synonymous with international law – and pry loose any US troops.

Today, the Dutch mostly treat the issue as a joke, a cowboy American moment. But it is widely felt that if President Barack Obama's foreign policy team wants to achieve a symbolic break with the previous White House, it could rescind the invasion law.

"We" have been invaded before. Last time it was in 1940 by a country you are now kindly requested to call "the nazis", but it was Germany, actually. It still is the biggest national trauma, even though subtly "we" are asked to think differently about it (by saying nazis instead of Germans, as I mentioned - after all, they have had God on their side for quite a while as Dylan tells us). Even the most obedient Friend of the US is not threatened by a special authorization for an invasion, but the second most obedient apparently is. And "we", innocently smoking cannabis and cherishing "our" red light districts - make that: tiptoeing in our wooden shoes through the tulips with windmills adorning the fields - do not deserve precision bombings and surgical strikes in the historic capital of Holland (officially Amsterdam is the capital of the Netherlands, because the Constitution says so, but you are forgiven for making this mistake). What have "we" done to deserve this, after "our" loving participation in the destruction of the lands of ziggurats, Rabiya, Rumi, the giant Buddhas (oops)?

I am glad the Christian Science Monitor talked to Max van Weezel, a journalist who was once a faithful believer in bolshevism and now is as faithful to the idea of bombing Palestinians into submission (right or extreme right, my Israel). He tells us the threat is not taken very seriously.

Let's face it, this so-called International Criminal Court is not meant for people from countries which do the precision bombings. So the chance of George W. Bush or even some private from the US Army ever ending up in a prison cell in lovely Scheveningen is infinitesimally small. If this happens, something else must have changed radically in this world. And this will not happen under Barack Obama. Still, he probably will take no chances, so the Invasion Act will remain in force. "We" the Dutch shall have to live with the sin of harbouring the judicial capital of the world.

And now you must excuse me - I have to put on my klompen and go milk the cows (put out my spicy cigarette first, the ladies do not like that).