Candlemass - a homily of sorts 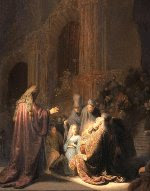 The Presentation of the Lord, popularly known as Candlemass, only became known to me, grown up as I am in the Reformed tradition, through contact with the Catholic Church. Probably it was too obvious a feast with a pagan background. Being the 40th day after Christmas it marks the bordering of the two different periods of Christmas and Easter.

Apart from the perhaps very syncretist background of the feast - which Christian feast does not have that origin? - the story in the gospel on which it is based is confusing. We read in Luke 2:

[22] And when the days of her purification according to the law of Moses were accomplished, they brought him to Jerusalem, to present him to the Lord;
[23] (As it is written in the law of the Lord, Every male that openeth the womb shall be called holy to the Lord;)
[24] And to offer a sacrifice according to that which is said in the law of the Lord, A pair of turtledoves, or two young pigeons.
[25] And, behold, there was a man in Jerusalem, whose name was Simeon; and the same man was just and devout, waiting for the consolation of Israel: and the Holy Ghost was upon him.
[26] And it was revealed unto him by the Holy Ghost, that he should not see death, before he had seen the Lord's Christ.
[27] And he came by the Spirit into the temple: and when the parents brought in the child Jesus, to do for him after the custom of the law,
[28] Then took he him up in his arms, and blessed God, and said,

Nunc dimittis, is what he said, even though Simeon undoubtedly must have spoken Aramaic and behold, his hymn in Scripture is in Greek. The King James Version lets him sing in English. Never mind, that is not a problem. A problem can be based upon Matt. 2:

[11] And when they were come into the house, they saw the young child with Mary his mother, and fell down, and worshipped him: and when they had opened their treasures, they presented unto him gifts; gold, and frankincense, and myrrh.
[12] And being warned of God in a dream that they should not return to Herod, they departed into their own country another way.
[13] And when they were departed, behold, the angel of the Lord appeareth to Joseph in a dream, saying, Arise, and take the young child and his mother, and flee into Egypt, and be thou there until I bring thee word: for Herod will seek the young child to destroy him.

So after Epiphany, ten days after the day of the Holy Innocents, the couple with the newborn child went to Egypt and stayed there for three years. Still they were in the Temple in Jerusalem on the fortieth day.

Maybe the Reformed Church was embarassed by this illogical incongruity and chose the Egyptian story instead of the Presentation in Jerusalem. It cannot be discarded but you'd better not stress it...
Fortunately, Holland is not as protestant as popular stories would like to tell now, so Rembrandt van Rijn made at least three paintings of the Presentation. There is one at the top of this entry.

Less rationalist traditions still accept the mythical background of Scripture. It was never meant to be read as a railway guide. But accepting it as mythical is becoming more difficult by the day, it seems, to a Church which at the same time is complaining about secularisation.

I would love to see the mythical status of the Bible restored to its rightful place, but this is a wish against a tide which I fear is irresistible. As yet anyway.

But I can give you this thought of Christian anarchist Louis A. Bähler, Dutch Reformed minister, both rationalist and mystic, who called it a blessing that there are so many internal contradictions in the Bible. This way it can only be seen as a democratic book, no-one can claim to be Right in the interpretation. Let this be our reply when we meet people from a certain bus who command us to enjoy our life.