Some requests for Mr. Obama 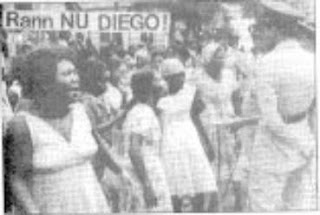 William Blum is summing up on foreign policy against the embodiment of Hope for Change in the USA, and it is not a pretty picture.
The surprising story is near the end: the sickening truth about Lockerbie. Sometime, when it is in the imperialist interests of the regimes in Washington and London, they will bring out the apparent truth about the responsibility for this act of state terrorism. Ironically, we should hope there will be no such opportunity. (To understand these remarks you have to read the piece by William Blum, given in the link).

One point Blum does not mention: the fate of the Chagossians. An entire people deported for a US base in the centre of the Indian Ocean, from which East Africa, the Middle East and the Subcontinent including Afghanistan can be conveniently bombed. Which has been done. With the blessing of the British law lords who decided in an amazing judgement that the State has to decide where you may end up to be living, a kind of verdict to be expected in fascist Italy or nazi Germany. Unfortunately, we are no longer surprised nor shocked by such a verdict.