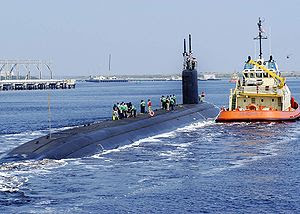 Trident submarines serve as the sea based nuclear launch system of the Air, Land, and Sea Nuclear Triad supported by the US government. The U.S. currently has 14 nuclear-powered Trident ballistic-missile (SSBN) submarines.  Trident submarines are 560 feet in length, or nearly two football fields.  Each submarine can carry 24 submarine-launched ballistic missiles (SLBMs) designated Trident D5 and each missile can carry up to eight 100 kiloton nuclear warheads (about 30 times the explosive force as the Hiroshima bomb).

Naval Submarine Base Kitsap-Bangor is located 20 miles west of Seattle on the deep waters of Hood Canal in Washington State.  It is the home to the largest single stockpile of nuclear warheads in the U.S. arsenal, housing more than 2,000 nuclear warheads. This is approximately 24% of the entire U.S. arsenal. The Bangor Base presently houses more nuclear warheads than the countries of England, France, China, Israel, India, Pakistan and North Korea combined.

There are eight Tridents based at the Bangor Base; six operate out of Kings Bay, GA.  The Trident submarines at Bangor are likely to be used first in any nuclear attack, either as an isolated tactical assault on a specific site, bunker, or weapons location, or in a larger strategic nuclear attack. The D5 missile is capable of traveling over 1,370 miles in less than 13 minutes, allowing for a US nuclear strike anywhere on planet earth within 15 minutes.
Posted by AdR