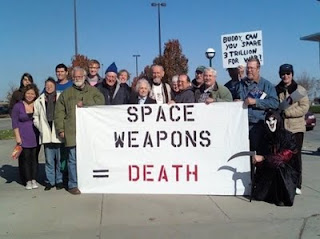 A lovely story which reminds me of my first acquaintance with Christian anarchism in present day Europe, the Ploughshares Movement - a judge who showed respect for the motivation of the axe man. Rare, but not impossible.

- On Wednesday, November 4, 2009 the Omaha and Des Moines
Catholic Worker communities and friends held our fourth annual protest
and ‘Die In” at the Qwest Center in Omaha at SRATCom’s Space Weapons
Bazaar called the Strategic Space Symposium in Omaha NE, Nov 2-4.
The effort began with a group of over 30 people gathered across the
street from the main entrance of the Qwest Center at 11 a.m. We moved
in mass across the street to the main entrance, set up our “Space
Weapons = Death” banner. We gathered around the banner and read of our
statement. (See a copy of the statement below.)
After the statement was read a number of people, including the 8 who were arrested laid down on the ground in front of the banner, enacting a “Die-In”.

By Frank Cordaro, Des Moines Catholic Worker
Nov 5, 2009
The four out of state “Space Weapons Bazaar” protesters who were  arrested Wed. Nov 4th at the Qwest Center in Omaha spent the night at  the Douglas County Jail. We were Fr. Louis Vitale of CA, Fr. Jim  Murphy of WI, Steve Clemens of MN and me Frank Cordaro of IA. We were  all charged with a City of Omaha ordinance “20-155 Request to Leave” a  misdemeanor offense with a maximum penalty of six months in jail  and/or a five hundred dollar fine.


On Wed Nov 5th we appeared before Judge Darryl Lowe in what is called  ”jail court” with sixty other Douglas Co Jail inmates at 1:30 p.m. for  what turned out to be the most entertaining and perplexing two hours I  have ever spent in a court room.

Jail courts are the places where people who get arrested and booked  into county jails, and do not bond out, get to see a judge for the  first time. This is the time when most inmates can plead guilty or  innocent, be assigned a court appointed attorney and have their bail  reviewed. The vast majority of inmates who appear in these jail courts  are poor and people of color. Ninety percent plead guilty, knowing  ”you get the justice you can afford” in this country and if you’re  poor, you’re better off pleading guilty and doing the time up front  than pleading innocent and doing more time awaiting trial, a trial in  all likelihood you would end up losing whether you are innocent or  not. It’s not a pretty picture to watch. It’s often done with out  feelings or human concerns for those being judge.

This time it was different. The officer who talked to the sixty of us  before we were lead into court told us that Judge Lowe is a very  different kind of judge. “He’s liable to ask you the strangest of  questions.” The officer was not wrong. In the two hours we spent  before Judge Lowe he made inappropriate comments,  asked questions way beyond the scope of his professional obligation  as a judge, and delved into people’s personal non-legal issues.

Yet Judge  Lowe was also one of the most caring and humane judges I have ever  seen work from the bench. Beyond his extremely large public,  entertaining ego, he showed real concern for the people who stood  before him. For those who plead guilty, he went to great efforts to  find a sentence that really matched what the inmate needed in order to  make right for the crime committed and help them get their lives back  together. Judge Lowe meted out justice that day unlike I have ever  witnessed in a court of law. It was justice with a heart.

Before the court session started Judge Lowe made some introductory  remarks. Among them was his admonition that people take personal  responsibility for their alleged activities. “If you are innocent,  plead innocent and if you are guilty plead guilty. And if you plead  ’no contest’ you better have a good reason cuz I don’t take lightly to  people who are just trying to not take responsibility for their  actions.”
As the two hour session was coming to a close it was clear the judge  was speeding up his pace, wanting to be done by 3:30 p.m. The order of  the cases was presented to him from the most serious to the least  serious. We four protesters were the last four cases of the day. We  were all in our orange jail-issued outfits.  By the time Fr Louis  Vitale was called to the bench we were the only ones left in the court  room, with the judge, the prosecutor, the two court recorders and the  four jail police officers.
As Fr Louis approached the bench the  prosecutor told the judge that the last four of us were all here from  the same charge and that the arrest took place at the Qwest Center the  day before. Judge Lowe did not even look at any of the paper work. He  talked about his being at the Qwest Center on many occasions for  concerts and basketball games. That was all he needed to know. Judge  Lowe asked Fr Louis “What do you plea?”

“No contest,” said Fr Louis.
And before Fr Louis could say anything else Judge Lowe said, “Five  days!” and pounding his gavel saying, “If you had plead guilty it  would have been three days. Next.”
Fr Louis was dumbfounded. He tried to explain to the judge that all he  wanted to do was make his plea and ask that the sentencing be  postponed until the four local Omaha people went to trial. Fr Louis  needed to be on a plane Saturday morning for a speaking engagement and  Mass obligations Sunday. A five day sentence would make it impossible  for him to make his commitments. Judge Lowe would hear none of it. He  pounded his gavel and told Fr Louis if he wanted to appeal the  sentence he would have to come up with a $100,000 bond! “Next,” shouted  the Judge Lowe as the guards led Fr Louis out of the court room.

Fr Jim Murphy approached the bench. And Judge Lowe asked him “What do  you plead?”
“No contest” said Fr Jim, and then he immediately changed his plea to “Guilty!”
“Three days” said Judge Lowe pounding his gavel. “Next!” shouted Judge  Lowe as Fr Jim was lead out of the court room.

Steve Clemens approached the bench. By this time everyone had a chance  to catch their breath. Judge Lowe finally asked Steve, “What were you  guys doing at the Qwest Center in the first place?” Judge Lowe just  assumed the four of us were arrested for intoxication. He just thought  we were four old drunks.

“Catholic priest! Protest!” exclaimed Judge Lowe as the blood went out  of his face, “Bring those two priests back before me. Give me their  files.” The judge asks me to join them all at the bench. We explained  to him what our nonviolent protest was all about. He congratulated us  for our witness. He said he believed in nonviolent civil disobedience.  He said more of it needed to be done. He told us his father was active  in the civil rights movement in the south. He added, “of course I was  only four years old at the time.”  He shook each one of our hands.  Fr  Louis knelt down with his hands raised in prayer and thank God for the  Judge’s change of heart.

We were all sentenced to time served, given a pat on the back and in  essence told ‘Job well done good and faithful servants! He ended the  session by saying “I hope you all come back again next year!”
I have never ever been treated so well. Justice, not necessarily the  Law was served that day in the Douglas County Jail.
Posted by AdR