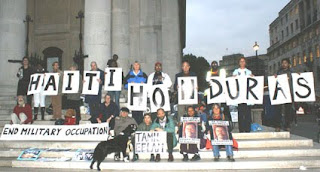 There are worse ways to give November 11th content or meaning than participating in this:

Vigil for Haiti and Honduras, the two poorest countries of the Western hemisphere and - undoubtedly not by coincidence - two countries where the elected president was hijacked abroad by putschists supported by a Nobel Peace Prize winning regime.

Apologies for the late mention, but rather late than never.
Source.
Posted by AdR