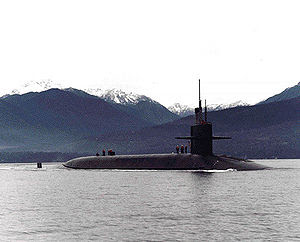 
Bill Bix Bischel, S.J., 81, of Tacoma, Washington; Susan Crane, 65, of Baltimore MD;  Lynne Greenwald, 60, of Bremerton, Washington; Steve Kelly, S.J., 60, of Oakland, CA.; Anne Montgomery RSCJ, 83, of New York, New York, were arrested on Naval Base Kitsap- Bangor. They entered the Base in the early morning hours of November 2, 2009, All Souls Day, with the intention of calling attention to the illegality and immorality of the existence of the Trident weapons system.  They entered through the perimeter fence, made their way to the Strategic Weapons Facility - Pacific  ( SWFPAC) where they were able to cut through the first chainlink fence surrounding SWFPAC, walked to and cut the next  double layered fence, which was both chain link and barbed wire, onto the grounds of SWFPAC. As they walked onto the grounds, they held a banner saying "Disarm Now Plowshares : Trident: Illegal + Immoral",  left a trail of blood and hammered on the roadway (Trigger Ave. and Sturgeon) that are essential to the working of the Trident weapons system, hammered on the fences around SWFPAC and scattered sunflower seeds throughout the base. They were then thrown to the ground face down, handcuffed and  hooded and held there for 4 hours on the wet, cold ground. They were taken, hooded, and carried out thru the very holes in the fence that they had made, for questioning by Base security, FBI and NCIS. They refused to give any information except their names, and were cited as of now, for trespass and destruction of government  property, given a ban and bar letter and released.

In a joint statement, the group stated that The manufacture and deployment of Trident II missiles, weapons of mass destruction, is immoral and criminal under International Law and, therefore, under United States law.  As U.S. citizens we are responsible under the Nuremberg Principles for this threat of first-strike terrorism hanging over the community of nations, rich and poor.  Moreover, such planning, preparation, and deployment is a blasphemy against the Creator of life, imaged in each human being.

There have been approximately 100 Plowshares Nuclear Resistance Actions worldwide since 1980. Plowshares actions are taken from Isaiah 2:4 in Old Testament (Hebrew) scripture of the Christian Bible, łGod will judge between the nations and will settle disputes for many people. And they shall beat their swords into plowshares and their spears into pruning hooks. And nations will not take up swords against nations, nor will they train for war anymore. 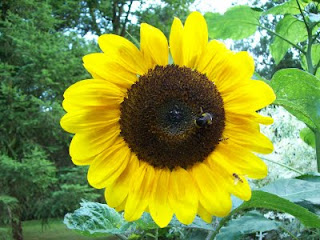 [These dispatches were sent to me by Ms. Cohen - a truly even more disarming detail. The snapshot of the sunflower was taken in the garden of a convent to which I retreat regularly.]
Posted by AdR