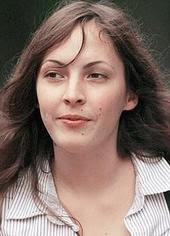 The picture represents twenty year old Gerrah Selby, sentenced to four years imprisonment for animal rights activism. She can neither be visited nor written as she wants to keep the place where she has been locked up undisclosed. This is a story about animal rights activists who are treated as terrorists ("extremists") and antisocial elements at the same time - a text borrowed from Infoshop.org:

On Wednesday 21st January 2009 the police's National Extremism Tactical Coordination Unit issued a press release celebrating the jailing of seven animal rights campaigners for "over fifty years". In their press release NETCU are at pains to point out that the sentences have "nothing to do with freedom of expression" and that those jailed are "extremists".

NETCU, a shady, unaccountable branch of the UK's expanding political police, have thrown the weight of their press department behind a campaign to present the seven defendants, all active in the Stop Huntingdon Animal Cruelty (SHAC) campaign, as extremists. The mainstream media has swallowed NETCU's spin unquestioningly without seeing the affair for what it is -- a political trial with serious ramifications for the right of individuals to voice their dissent against corporate power.

On December 23rd, 4 out of 5 activists on trial at Winchester Crown Court were found guilty of 'Conspiracy to Blackmail' at Winchester Crown Court after a 3 and a half month long trial. Natasha and Greg Avery and Dan Amos had plead guilty during Summer 2008. During the trial much had been made about how each defendant fitted in to what the prosecution described as the "hierarchy" of the SHAC campaign. At the three day long sentencing in January, Judge Butterfield sentenced the defendants according to how he saw them in this "hierarchy", not according to the evidence against them. Accordingly Greg and Natasha Avery were given the heaviest sentences possible, but were given credit for their guilty pleas and were sentenced to serve nine years each. Heather Nicholson, who plead not-guilty, received the longest actual sentence, eleven years. Gavin Medd Hall was sentenced to eight years, Daniel Wadham got five years, and Daniel Amos and Gerrah Selby were each sentenced to four years.

One thing that was not reported at all by the mainstream media was the imposition of indefinite anti social behaviour orders (ASBOs) on four of the defendants preventing them from protesting against animal experimentation. These ASBOs make otherwise lawful protest activity into a crime, punishable by up to five years in prison. The use of indefinite ASBOs against protesters is, as far as Corporate Watch knows, a completely new development. The terms of the orders could prevent these four people, all dedicated campaigners against vivisection, from ever voicing their political views again. The orders could even be interpreted as preventing the defendants from speaking or writing against vivisection.

By giving the maximum possible sentences, the Judge was effectively saying that this case represented the most serious form of blackmail. However, the allegations against those convicted would not fit in at all with a layperson's definition of blackmail.

As Corporate Watch wrote last month, the charges related to over four years of concerted campaigning against Huntingdon Life Sciences (HLS). The essence of the blackmail charge is that SHAC called for companies to cease trading with HLS and wrote polite letters to that effect. SHAC also encouraged their supporters to write to and protest against companies working with HLS. In some cases, direct action occurred, but this was never called for by SHAC. Letters were sent to company employees falsely accusing them of paedophilia, threats were received in the post and cars were paint-strippered. Evidence was presented that suggested that some of the defendants may have had knowledge of, or been involved in, some of these activities. However, many defendants were convicted because of what they said on demonstrations against HLS and their suppliers or because of the length of their involvement with SHAC.

Let us look at the case of Heather Nicholson, the defendant who received the most severe sentence, eleven years. Heather is a committed, long-term campaigner for animal rights and had been involved with SHAC since the beginning. She had lived and worked at the SHAC office and been involved with communicating, politely, with companies doing business with HLS. Only the most tenuous of circumstantial evidence linked Heather to any of the activities parroted in the press as attributed to her. Heather was convicted because of her long involvement with SHAC and given the most severe sentence because of Judge Butterfield's perception of her importance to the campaign.

In the case of the defendants who were newer to SHAC, their convictions stemmed largely from words spoken on demonstrations. These convictions are extremely worrying as threatening words should normally be dealt with, at most, by charges under the Public Order Act. Again, the catch-all charge of "conspiracy to blackmail" meant that the defendants could be dealt with more severely because of their association with others.

Judge Butterfield was not content with the harsh sentence doled out to the SHAC 7. In his sentencing he invited the Department of Public Prosecutions to consider indefinite detention in blackmail cases. Surely Judge Butterfield had seen the potential for the state to use this charge in the future as a bludgeon to silence political dissent.

Despite the repression of the SHAC 7, resistance against HLS, Europe's biggest animal testing laboratory, continues. Protests against financiers of HLS, and in solidarity with the SHAC 7, have taken place across the UK, Europe and the US while a protest against the Bank of England, who have provided HLS with banking facilities since their regular bankers dropped them, is planned for 27th February. (see www.shac.net)

For more on the state repression of anti-corporate dissent see:

Whose Agenda do Reports of Eco-Terrorism Serve?

Animal rights have been a Christian anarchist action issue for over 125 years, especially the struggle against vivisection. Prison sentences of up to twelve years for animal rights activism amounts to a declaration of war to any kind of activism, regardless whether it can pass the non-violence test or not. Sentences which are telling as to where the priorities of this society lie.
Posted by AdR