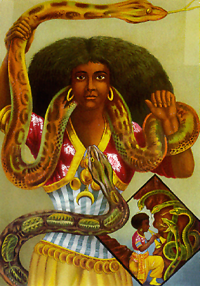 Peter Owen Jones avoided the sensationalism of zombies and pin-pierced dolls whilst presenting vaudou in Around the world in 80 faiths. However, he had to leave ceremonial service because of the animal sacrifice which made him sick. Did he ever read the Old Testament, as he quite probably will call it? Would he think the offerings which are supposed to supply a lovely smell unto the LORD are in it as a kind of joke?

Vaudou, as any religious belief system, is a very serious creed. It should be needless to say, but spending three times seven minutes at different appearances of vaudou in Benin for most viewers cannot have left an impression of a serious relligion. Now we know the presenter gets seasick in a very plain fishing boat after offerings to Mamy Wata, the vaudou sea goddess. The name should sound suspicious to speakers of English or Dutch, but Owen Jones did not even get this right as Wikipedia tells us:

Mami Wata is a pantheon of water spirits or deities, venerated in West, Central, and Southern Africa, and in the African diaspora in the Caribbean and parts of North and South America.

So Mami (Mamy) Wata is a pantheon in it-/herself. Oh well, being seasick is more important than a good explanation. Still, the name might have been re-imported from the American diaspora, as Mamy Wata is also known in the "West Indies" as Maman Dlo, which should make francophone people wonder. Very interesting that there should be religious and cultural interchange on both sides of the Atlantic against the odds of slavery, but Owen Jones does not bother to explain anything. He is seasick and he is sick of animal sacrifice.

Ten faiths - three of which vaudou and one Rastafarian, which should have been expected, perhaps all four of them, in an America-instalment - in one hour, and there it is folks: Africa. One of the ten was presented as Afrikaner Calvinism. This should have been very recognizable to me since the Statenbijbel has been used well into the twentieth century in South Africa, and the Nederduitse Gereformeerde Kerk in South Africa originally is a branch of the Church I grew up in. Rather late, but very important was the rejection by the NGK of apartheid - in 1986 - which may have been as important to the ending of apartheid as a state system as any resistance by the ANC.
But the viewers of BBC2 must think that Afrikaner calvinism expects the second coming in 2020 and it considers apartheid holy.
I am beginning to think this is doing damage rather than cultivating understanding of the rich religious "fauna" or flora of humankind.

The images: Mamy Wata echoes Maria Stella Maris, who herself is a continuation of many sea goddesses. She even appears in Daoism, as Tianhou, Queen of the Sea - and China has not been cursed by colonial whips bringing obligatory belief in the Redeemer meanwhile taking away millions of people as slaves... 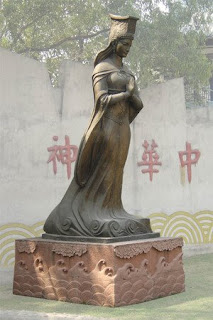