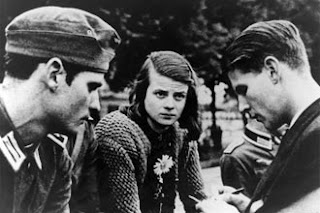 After his death Dag Hammarskjöld's diaries revealed the mystic in him, for which he seems to be more famous nowadays than the function which made him well-known worldwide during his life: secretary-general of the UN.
This quotation from the published journal entries, called Markings in English, sounds beautiful, does not it?

I don't know Who — or what — put the question; I don't know when it was put. I don't even remember answering. But at some moment I did answer Yes to Someone — or Something — and from that hour I was certain that existence is meaningful and that, therefore, my life, in self-surrender, had a goal.

It sounds beautiful as long as we abstract from what Hammarskjöld actually did. Not long before his death he probably was complicit in toppling - and indirectly in killing - Patrice Lumumba, the democratically elected prime minister of the former Belgian Congo, which now bears the scornful name of Democratic Republic of Congo. His responsibility for creating the incredible mess in this unhappy country cannot be measured.

Saying yes about what?
Is there anything worth mentioning being done by the United Nations these days?

Let us celebrate those who said or say No! when it is necessary. This "no" is a more emphatic "yes" to Someone or something, and it is a no to the idea of living with an accomplice to murder or a murderer - yourself.
The no that was said by Die Weiße Rose, by the Underground Railroad, by conscientious objectors like the shministim and others. First of all it takes a no to say yes - you might call that practical mysticism but you do not have to.
Just say no to the State.