Nothing to lose but your business class seat 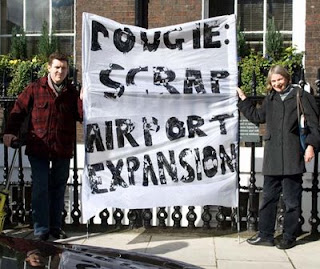 George Monbiot sums up effectively against the very unholy coalition that is selling Heathrow's third runway to the public. The selling point of those who pretend to be on the left is that the working classes are kept from flying to the costas on the cheapo cheapo by aristocratic so-called green maniacs. The figures show it is not the working class that's using cheap flights to go on their third holiday of the year - as if we should have expected otherwise.
But then there is the cultish former trotskyist crowd that is campaigning against green activism in general and against activism about new runways in particular. Monbiot does not notice them but I do: they are joined by the anarchist-classist group Class War that was crying out loud against the occupation at Stansted last year. The British (English?) working class, you see, has an inherent right to cheap flights to picturesque villages at the Mediterranean seaside - which unfortunately are no longer picturesque but who cares as long as there is lots of beer and a dance hall for your own tribe?

Just like the trotskyists of Spiked folks at Class War seem to think that being working class is particularly a matter of culture and hence a matter of choice. And stories about "Britain" losing out on the battle for aviation (you are not supposed to think about Wales or Scotland, or even the North of England) are being sold to be swallowed whole for the crowd wot reads The Sun - because they are soooo working class.

A type of reasoning that is not just plain stupid. It is willingly malignant. And of course very much on the extreme right.