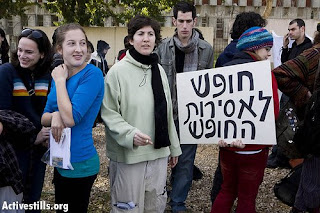 I just received this call to take action on behalf of two conscientious objectors in Israel. Since in most parts of the world it will not be useful to send a letter or postcard to one or both of the imprisoned girls before Jan. 29th it would be best to email a letter of support.

It looks like the regime wants to be rid of these annoying objectors by declaring them medically unfit to serve. Three of the shministim mentioned earlier have been released on this ground.

Two women objectors, Raz Bar-David Varon and Maya Yechieli Wind, both signatories of the 2008 high school seniors refusal letter, reported on Wednesday, 14 Jan., at the Induction Base, declared her refusal to serve in the Israeli military and were sentenced to 14 days in military prison. Both were told that the military prison for women is full and kept in the Induction Base for several days. Eventually, they began their prison terms yesterday (19 Jan.)

This is the fourth prison term for Raz, and the first one for Maya, 19, from Jerusalem and a United World College graduate, who has prepared the following declaration upon entering prison:
At first, like many other Israeli citizens, I too could not bring myself to confront or criticize the Israeli military’s immoral actions. I realize that this difficulty originated from my sense of identification with soldiers my own age, to whom I could relate. Today it is precisely this realization that leads me to refuse to serve. I cannot recognize the humanity of Israelis but not that of Palestinians. It is because of my deep sense of commitment and responsibility to the community in which I grew up that I am refusing to contribute to this cycle of bloodshed.

The occupation has no defensive advantages. On the contrary, the pointless occupation of millions of people only leads to radicalization of opinions, hatred and the escalation of violence. Violence is a cycle that feeds into itself. This cycle will not stop until someone stands up and refuses uncompromisingly to take part in it.

This is what I am doing today.

My views are also relevant to the current operation in Gaza. One form of violence cannot stop another. This current violence is the result of decades of ongoing occupation of the territories and sieges on Gaza since the disengagement. I mourn the unnecessary deaths of both Palestinians and Israelis.

Yet again we have chosen war.
The two objectors are due out of prison on 29 Jan. and are likely to be imprisoned again afterwards. Their prison addresses are:

Raz Bar-David Varon
Military ID 6000383
Military Prison No. 400
Military Postal Code 02447, IDF
Israel
Fax: ++972-3-9579389
Since the prison authorities often block mail from reaching imprisoned objectors, we also recommend you to send your letters of support and encouragement to the imprisoned objectors via e-mail to shministim@gmail.com, and they will be printed out and delivered to them during visits.

Since the beginning of the assault on Gaza, there has also been an a wave of reservists who refused to take part in it. The military mostly avoids sending these reservists to prison. One objector is now serving a 14-day term for refusal, but at the request of his family we are not revealing any other details on his case.

Another exception to the rule is the case of Noam Livneh, an officer in reserves and one of the main organisers of the Courage to Refuse movement. Noam has been imprisoned for refusal in the past (January 2001). Yesterday (19 Jan.), in an unprecedented step, he was not sentenced by an officer, as would usually happen, but was rather arrested by the military police. There is a possibility that he will be put to trial before a military tribunal. We will update on further developments as they happen.

A media report on Noam's case, also mentioning Maya and adding some further background can be read here.

There has also been a news story reporting the case of a helicopter pilot, Capt. Orr, who refused to take part in the bombing of Gaza (hat tip to Max Watts, who brought this report to our attention). However, we were not able to find any independent confirmation of this story, and have some doubts about its reliability.

Finally, COs Tamar Katz and Yuval Oron-Ofir have been recently exempted from military service on medical grounds, and are no longer in danger of further imprisonment. Thanks to all who took action on their behalf.

First of all, please circulate this message and the information contained in it as widely as possible, not only through e-mail, but also on websites, conventional media, by word of mouth, etc.

Other recommendations for action:

1. Sending Letters of Support
Please send the imprisoned objectors letters of support (preferably postcards or by fax) to the prison addresses above.

It would be especially useful to send your appeals to the Commander of the Induction Base in Tel-HaShomer. It is this officer that ultimately decides whether an objector is to be exempted from military service or sent to another round in prison, and it is the same officer who is ultimately in charge of the military Conscience Committee:
Gadi Agmon,
Commander of Induction Base,
Meitav, Tel-HaShomer
Military Postal Code 02718, IDF
Israel.
Fax: ++972-3-737-60-52

For those of you who live outside Israel, it would be very effective to send protests to your local Israeli embassy. You can find the address of your local embassy on the web.

Here is a sample letter, which you can use, or better adapt, in sending appeals to authorities on the prisoners' behalf:

It has come to my attention that [name & military ID], a conscientious objector, has been imprisoned for [her / his] refusal to perform military service, and is held in Military Prison no. [6 / 400].

The imprisonment of conscientious objectors such as [name] is a violation of international law, of basic human rights and of plain morals, let alone when the same person is being repeatedly imprisoned for her self-same beliefs.

I therefore call for the immediate and unconditional release from prison of [name], without threat of further imprisonment in the future, and urge you and the system you are heading to respect the dignity and person of conscientious objectors, indeed of all human beings, in the future.

We will appreciate receiving copies from the letters to the address: support.refusers.israel@gmail.com