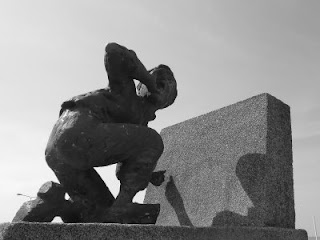 Alright, I have much better things to do today.
Writing about the late dean of Dutch Christian anarchism for example, the hydrographer Felix Ortt, who opened up the secrets of the tide on the Dutch coast. I still owe him his biography, and he may have started fingertapping in the World Beyond by now...
His knowledge did not prevent the flood of 1953, of which England got its share too. You cannot force nature. That's what the whole story of the effects of global warming, formerly known as the greenhouse effect, formerly known as air pollution, and actually now generally called climate change, is all about. You can change nature, but it will never be obedient.

I have been told about the rising seas all my life, so I am a bit surprised to hear this phenomenon mentioned as part of the dangers of global warming. No, I by no means am a sceptic. I have noticed daffodils flowering a full two months earlier than they used to do - and that happened only in my lifetime. Something is Upon Us. And the daffodils only tell their story. The peat bogs in Siberia are less spectacular - hardly any human living there anyway - but much more threatening perhaps than even the melting ice in the Arctic Ocean.

I live in a part of NL which will not stay dry if sea levels start rising impressively. There is reason to worry, as Auntie told us, a few days ago.

But I do not even have to study the life and times of a wrongfully forgotten hydrographer to know that there are no holes in dykes in which you can put your finger, unless it be a nest of mousies or wasps - and in the latter case you have got quite another problem at hand (no pun intended) than the danger of drowning.

I have to apologise for my compatriotes in Frisian Harns (Harlingen), Spaarndam and even Madurodam in The Hague. There they have put up statues for the hero who does not exist. Hans Brinker is not even a credible Dutch name, and even less a Frisian one. But the BBC thought it were real folklore instead of a stupid story by a US author.
And now I have to take another look at the dyke. Winds are rising unexpectedly.