The need to be alert 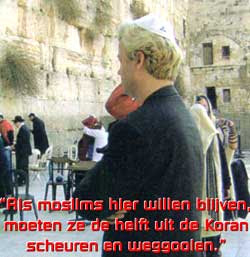 There is a good chance you missed it - I missed it as a news item in this country, but the BBC World Service which is standard for my alarm radio mentioned NL - as a last news item, to be sure, but still. Terror threat at the Children's Paradise of a certain Swedish build-it-yourself-(and-it-falls-apart-after-a-year-anyway) megastore. Dear oh dear, seven people with dual Dutch-Moroccan nationality arrested.
The Scotsman has it. I cannot find the news that it was a hoax on their site, and that's the way it works. Arrest some Moroccans - some of whom, we are told, had "suspicious sympathies" (sounds like a good reason for arrest, does not it?) and spread the word about the terror threat.
Only the local rag of Amsterdam had the opener that all arrested had already been released. Auntie quotes the beerdrinking girlpinching Christian of Christians of NL:

Prime Minister Jan Peter Balkenende said the warning showed "that we must remain alert for threats to our security".

Yes of course, these people with suspicious sympathies will not have left jail very sympathetic towards his regime, will they?

It is the daily nonsense of the war on terror which is supposed to keep the public trembling and, although We Are Very Much A Multicultural Society, we again are shown that there are folks who are just too multicultural, ya know. Bearded men in long grey woollen dresses, girls hiding their face. They, I am told, even refuse to eat pork.

And there will be the crowd that yells that left wing idiots at the department of justice let highly dangerous jihadis loose after treating them to a night at Her Majesty's five star hotels. Which brings me to the man at the illustration.
I am not going to desecrate this wonderful site with his name, so I hope you recognize him with his yarmulke and his ever blondied hair. He is the Führer of a party which is the biggest in NL - according to polls these days - a party with just one member, the Führer himself. It prevents the party-that-is-not from falling apart in vicious fighting, which happened to all extreme right parties in NL, pre- and post-WWII. Apparently the other representatives of his party-which-is-not-one are very carefully handpicked and are not making a fuss.
The still makes him warn against muslims: those who want to stay in NL must be prepared to tear out half of the Qur'an and throw it away.

Some time ago the intelligence agency which also knew about the suspicious sympathies of the terrorists-who-were-not leaked that the man has been visiting the Israeli embassy for about three or four times a week for the past several years. They
leaked this news to the most unlikely newspaper that probably politically is closest to him (at the time they still supported the christian democrats, but it is not such a big change). Why this news in this paper? It did not make very much difference, because all other (real) parties treated the news very demurely - oh well, this racist is receiving orders from the Jewish State in the everlasting war against the muslims? Well you are not even supposed to call the man a racist. The Anne Frank Foundation had the courage to call him that. Quickly Those In The Know said they are of course a bunch of ultraleftist terrorist sympathizers.

(In case you are wondering: the Führer is not a Jew; ironically, he would not get this far in extreme right politics if he were).

On the day the regime decided we had to be ever alert about terrorism - yesterday, that is - I read this article about Israeli spying in the US. Why be surprised?
I was, however, a bit surprised that it says the most pro-Israeli broadcasting society in NL had the news that Israeli intelligence agencies are tapping the Dutch intelligence agency, probably completely.
What a murky story. But it made me understand why the Dutch intelligence agency leaked the news about the Israeli connection of the Blondied One.
Without any political consequence, since all real parties are supporting the Jewish State in what is probably its most dangerous time, which is now, of course.

And people in NL are hardly ever reminded of the historical fact, and perhaps for others it must be mentioned as well: the Kingdom of the Netherlands was the state with the largest muslim population of the world until after World War II. It is not something to boast about, and most muslims involved did not enjoy it, but yet it is true.