From our own correspondent near the Bible belt 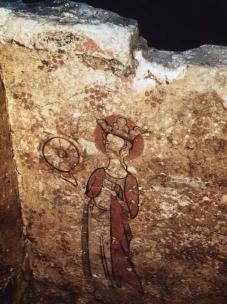 Yeah, grrreat. Always good to be in the news, especially for reasons like this. And as it is the twentieth anniversary of my personal discovery of what the Dutch Reformed Church is all about (they have abolished the entire Church meanwhile, btw) which also showed me the way to Christian anarchism, grant me the liberty of an in-depth comment to this piece of news from everloving Auntie:

Christian influence on everyday life is one thing, but in the Dutch Bible belt it also matters what kind of Christianity it is.

A group of traditionalist Protestants has objected to the use of the European Union emblem on car registration plates in the Netherlands, on the grounds that the circle of 12 golden stars on a blue background symbolises the Roman Catholic veneration of Mary, the mother of Jesus.

Well, I never... I always want to fall asleep very tightly, whenever the subject of the European Union or any of its symbols comes up. The best I can think of is a very long yaaaaawwwwn. Never thought of Jesus' mother when looking at that blue starry rag. Silly me.

The National Foundation for the Preservation of the Political Reformed Principles is concerned that the symbol is too close to the 12-star halo surrounding Mary's head in Roman Catholic art.
According to the Vatican newspaper L'Osservatore Romano, the designer of the emblem, Arsene Heitz, said he got the idea from 19th Century reports of apparitions of the Virgin Mary in Paris.
Other politicians say that the symbol dates back to Greek mythology, long before Christianity.

So, it is true? The European flag is inspired by apparitions of the Virgin Mary in Paris? Or is this referring to the halo, and is this a palaeolithic tradition, invented in the 19th century? Writing a comprehensible story is not everyone's job. But let's proceed.

The foundation works to promote Calvinist principles within the Netherlands' oldest party, the Political Reformed Party, which draws much of its support from Christians living in the country's Bible belt.

I am really glad the editor for religious affairs made his own translation of the Staatkundig Gereformeerde Partij. I would not translate it like that, only the Party-bit is right as far as I can see. The other elements in the name of this party take a historical lecture no foreign correspondent would like to hear. Neither would most of the atheist or agnostic or non-Christian Reformed compatriots for that matter.

The "Bijbelgordel" runs from the south west to the north east across the central portion of the Netherlands and contains communities in which the Reformed Christian Church plays a central role, one hostile to the liberal attitudes of mainstream Dutch society towards such issues as euthanasia, abortion and homosexuality.
The belt is a relic of the conquest by Catholic Spain of Flanders and North Brabant, when Protestants were told to leave or convert to Catholicism.
Many moved just across the border, and their successors helped found conservative churches such as the Reformed Congregations, known locally as the "black stockings churches".

Ah, you are giving a historical lecture after all? But this Bible belt runs from the annexed parts of Flanders right up to the Waddenzee in the North. And let me tell you a secret: there are lots of people living in this belt who are not Biblethumpers. Some remained Roman Catholic, like the average person in NL did - contrary to the National Legend, invented in the 19th century, of a Calvinist nation. And there are even atheists, modernist Protestants, Mennonites, and even Muslims living in this belt. Why there are not any Jewish communities left would take another lecture. Perhaps correspondent Robert Pigott can think of that himself. Perhaps not.

I will explain the black stockings part, though. Biblethumping folks do not like secularisation, for which they blame the French Revolution. That is why their political current was generally known as the Anti-Revolutionaries.

One of the revolutionary things of the French Revolution is that men got rid of the culotte, knee-breeches under which you were supposed to wear black stockings.
To show how much they opposed this revolution ministers in the Bible belt kept wearing culottes, with black stockings. One of these reverends made it to the twentieth century, wearing a culotte, in the good old annexed Flemish town of Aardenburg - in the church even where the illustration is coming from.

Somehow these Biblebelters are obsessed with trousers. Women are not supposed to wear them, because the Bible tells us you should wear the clothes of your own gender. After long and careful consideration they decided that leggings are trousers, and cannot be allowed. Of course, Jesus Himself would have been refused as a cross-dresser, make that: transvestite, by these folks.

Among the belt's towns and villages is Staphorst, where Christian parties including the Political Reformed Party dominate the local council.
Christian observance has been sufficiently strict for swearing to be banned and cash machines not to dispense money on Sundays.
There have also been warnings about potential outbreaks of measles in the Bible belt, because of parents' suspicions about state vaccination programmes.

Staphorst somehow is proverbial for the Bible belt, and I do take offense to that, since part of my ancestry is coming from that area. And they were pious Protestants, no doubt about that, but they were not polio-seeking halfwits.

And actually, the Biblethumping people from this belt are not either. Dutch Labour Party-members, in the name of Feminism, decided that the oldest party of NL, the organisation of Christian Reformed folks (not Reformed Christian, mr. Piggot), should be prohibited because they are discriminating against women. For this they borrowed the name of religious anarchist Clara Meijer-Wichmann, of course reducing her name to Wichmann. Prohibiting a political party in the name of a foundation named after a religious anarchist is going too far for me, so I wrote to the Christian Reformed Party that I, as christianarchy.org, opposed this strongly and - oddly enough - support the right to exist of the Christian Reformed Party, which allegedly refused female members.

I got a lovely reply that they would put this Christian anarchist token of support into their dossier against looming persecution. Of course, the reply had been written by a woman. Without the female vote the party probably would not be represented in parliament at all. Our Good Lord has got many and strange boarders, to quote a Dutch phrase which sadly cannot be adequately translated.

But the Dutch government seems unwilling to compromise in the question of regulations applying to number-plates.
Undaunted, the foundation's chairman, Op 't Hof, is selling stickers bearing the country's lion symbol for motorists to place on top of the EU emblem.
So far this act of defiance has prompted no official response.

There we go! Prove yourselves good Christian anarchists by showing the national colours, my beloved Black Stockings Folks.

P.S. Looking for culottes on the www I am reminded that knee-breeches nowadays are generally considered to be women's clothes - though not by Biblebelt folks, I trust. Another illustration...

P.S. 2: I made a reservation for a weblog named after Clara Meijer - check it out, most of it is in English.